Harvick wins at Texas after late-race pass on Truex 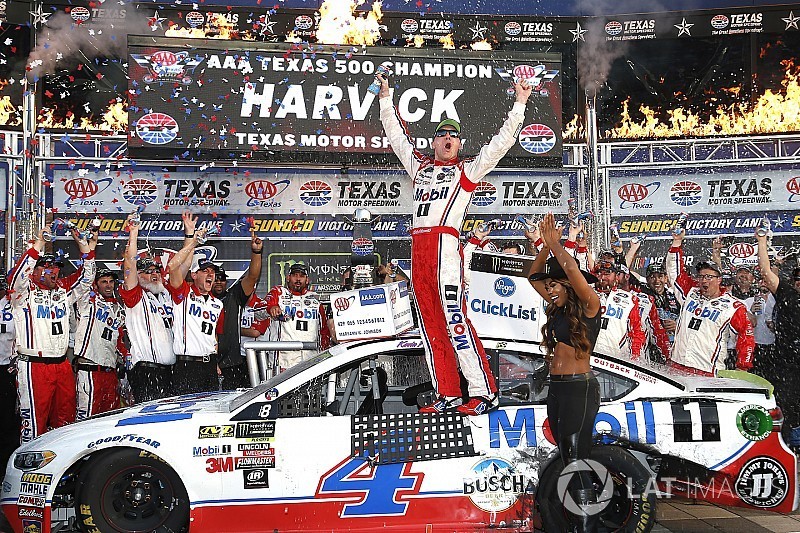 Harvick hunted down Martin Truex Jr. over the closing laps and passed him with 10 laps remaining for his 37th Monster Energy Cup Series win and a spot in the Championship 4 at Homestead-Miami Speedway.

"Damn, it’s good to be in Victory Lane here in Texas,” Harvick said. “I knew I had a really good car. I knew I had to do something different. I started driving a whole lot deeper in (Turn) 1—a whole lot deeper. I started doing that earlier in the race, but I was afraid I didn’t have the brakes to continue to do that all day. So I waited until the end and was able to get on the outside of Martin and got him loose and brushed across the back of him and was able to get by on the outside down there.

“Just really proud of everybody at Stewart-Haas Racing.”

Matt Kenseth, who pitted on Lap 155, remained on the track between segments. Martin Truex Jr., who made a two-tire stop on Lap 174, lined up second followed by Harvick, Larson, Jones (two tires), Blaney, Elliott, Kurt Busch, Hamlin, Austin Dillon, Keselowski, Stenhouse, McMurray, Earnhardt and Bowyer. Kyle Busch was the first car one lap down in 22nd. Johnson restarted 30th, one lap down.

Fourteen cars were on the lead lap at the end of the second segment, but seven additional cars took the wave around.

The fourth caution occurred on Lap 180 when Landon Cassill slid up into the Turn 1 wall after contact with Bowyer. Kenseth continued at the point followed by Truex, Jones, Harvick, Larson, Elliott, Blaney, Hamlin, Keselowski and Dillon. Kyle Busch, who was the lucky dog, pitted and lined up 22nd.

Bowyer went to the garage on Lap 203. Harvick finally cut Truex’s lead down to under a second by Lap 213. Kenseth continued in third followed by Larson, Keselowski, Kurt Busch, Blaney, Jones, Dillon and Elliott.

Truex’s lead grew to two-seconds by Lap 220 over Harvick. Kenseth, Larson, Keselowski, Kurt Busch, Blaney, Jones, Dillon and Stenhouse completed the top 10. Five laps later, Kenseth pitted from third. Truex relinquished the lead to Harvick on the next lap to pit along with Larson, Kurt Busch, Jones, Earnhardt and Suarez. Harvick pitted with Keselowski, Blaney, Elliott and Dillon on Lap 228.

Kyle Busch led for the first time on Lap 228 during pit stops. Kurt Busch returned to pit road with a loose wheel on Lap 232. He dropped to 22nd, one lap down.

The fifth caution was called for Michael McDowell who spun off of Turn 2. Busch held the lead followed by Logano, Truex, Kenseth, Larson, Harvick, Keselowski, Blaney, Jones, Stenhouse, Dillon, Hamlin, Elliott, McMurray and Earnhardt. Johnson, 30th, was the only Playoff driver outside of the top 15.

Ray Black Jr. spun in Turn 2 to bring out the sixth caution on Lap 240. Earnhardt pitted on Lap 242, but was forced to the garage for the team to repair the left front wheel hub.

Kenseth led the field to the restart on Lap 245 followed by Truex, Blaney, Harvick, Jones, Keselowski, Stenhouse, Kyle Busch, Elliott and Hamlin.Truex got his nose past Kenseth in Turn 1, ran side-by-side on the back stretch and completed the pass out of Turn 4. Elliott drove under Stenhouse in Turn 2 for eighth-place on Lap 249.

With 85 laps to go, Truex extended his lead to .420-seconds over Kenseth. Harvick, Blaney, Jones, Keselowski, Hamlin, Elliott, Larson and Stenhouse completed the top 10. Blaney got loose and fell from fourth to ninth on Lap 256.  Hamlin moved up to fourth followed by Keselowski, Larson, Jones, Elliott, Blaney and Stenhouse.

Truex moved up to second on the restart. Logano dropped to third followed by Kahne, Kenseth, Elliott, Harvick, Larson, Keselowski and Blaney. Kyle Busch returned to pit road with a flat tire and fell to 26th.

Kyle Larson was running 12th when he got high and hit the wall in Turn 4 on Lap 282. He bounced off the wall again between Turns 1 and 2 and the No. 42 burst into flames before coming to a stop on the backstretch and the yellow flag waved for the eighth time. NASCAR displayed the red flag at the three hour, 36-second mark.

Hamlin held the point followed by Truex, Logano, Kahne, Harvick, Kenseth, Keselowski, Blaney, Stenhouse and Elliott as the cars came to a stop in Turns 1 and 2 with 50 laps to go. After a 10-minute, 29-second delay, the race returned to yellow — and then green on Lap 289.

With 30 laps to go, Truex’s advantage was one-second over Hamlin. Harvick, Logano, Keselowski, Kenseth, Blaney, Elliott, Busch and Jones completed the top 10. Harvick passed Hamlin on Lap 306 for second. Kenseth moved by Keselowski on lap 308. Harvick closed into under a second of Truex with 24 laps remaining.

“Don’t worry, he won’t be able to catch us,” Cole Pearn told Truex.

Harvick was two-car lengths behind the No. 78 Toyota with 21 laps to go as Truex encountered traffic. Hamlin ran third followed by Logano, Kenseth, Keselowski, Blaney and Elliott.

Truex extended his lead by .466-seconds with 15 laps to go. Harvick caught Truex with 10 to go entering Turn 1. Harvick moved to the high line out of Turn 2 and took the lead.