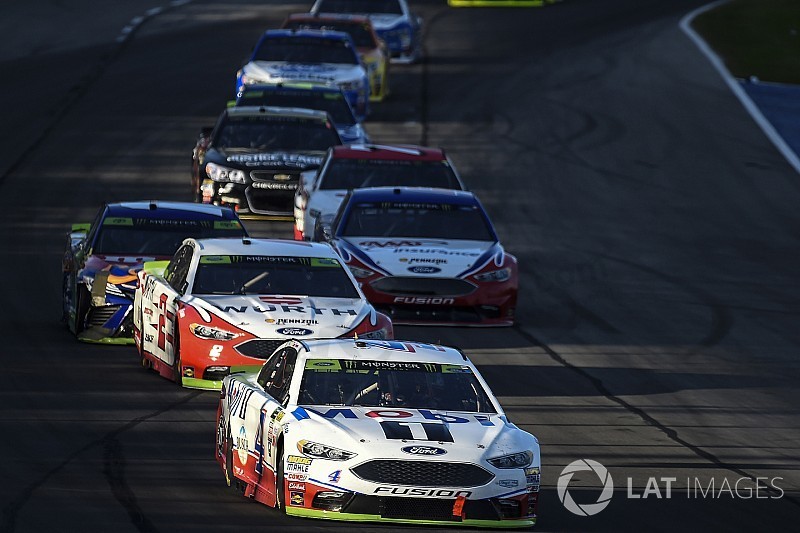 Truex has won six of the 10 races on 1.5-mile tracks, including the first three in the Monster Energy Cup Series Playoffs. But Kevin Harvick ended Truex’s run at Texas Motor Speedway on Sunday.

Oh, what a difference three months make. After a bit of a summer slump, Ford Performance has awakened like a revenant at just the right time with Stewart-Haas Racing and Team Penske leading the charge.

Harvick has exhibited spurts of speed throughout the season. He earned poles at Atlanta, the first Texas race and the Coca-Cola 600 at Charlotte. He dominated Atlanta and led 292 of the first 311 laps before a speeding penalty took the No. 4 Jimmy John’s Ford out of contention. At the first four intermediate tracks in the Playoff, Harvick’s average finish is 3.75.

“Ford is greatly responsible for that,” Harvick said. “They have spent a lot of money a lot of time, a lot of effort in working on the Ford performance side of things. The tools and things we have access to, the effort they put just within the walls of SHR has been very refreshing.”

Both Ford and Stewart-Haas Racing have addressed the growing pains of transitioning from Chevrolet. Not every team at SHR acclimated as quickly as the No. 4 team led by crew chief Rodney Childers. But as Harvick has discovered the inner workings of the Dearborn, Michigan-based auto manufacturer, he’s grown to admire the One Ford philosophy.

“I think as you look at the way things go, I didn't know anybody from Ford, never have dealt with anybody from Ford, but I can tell you from the top down they're very involved in not only our team but the Roush team, the Wood Brothers, Penske group,” Harvick said. “I think as we've gone through this, it does feel like one Ford. That's what they push.

“They take a lot from each team. As we've gone through the year, I think our relationship with especially the Penske side of things has developed. Brad (Keselowski) and myself talk a lot.  Paul (Wolfe, No. 2 Team Penske crew chief) and Rodney talk a lot. Those are the types of things that you need. It's fun. I really appreciate all the support from the top down because they love racing. When you have a group of people that love racing, you put them with a bunch of racers like we have at Stewart‑Haas Racing, (team co-owner) Gene (Haas), Tony, all the employees we have, it's a good fit.”

Previous Article:Harvick wins at Texas after late-race pass on Truex

Next Article:Setsuna shows off Slipper potential