Inside the mind of the Bank of England: how it sets rates 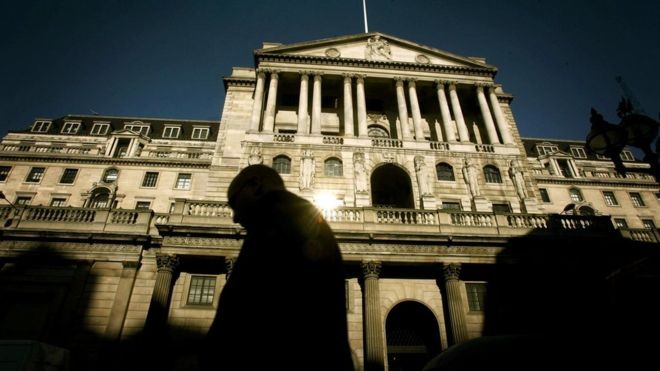 It's decision time. On Thursday, Bank of England policymakers will reveal its interest rate decisions.

How the nine members of the Monetary Policy Committee (MPC) vote will affect households and businesses across the UK.

That's because the Bank of England base rate is used as a reference point for millions of mortgages and savings accounts.

Interest rates are at a record low of 0.25% and there has not been a rise in interest rates in more than a decade.

The Bank's job is to try to keep inflation at about 2%.

The fall in the value of the pound pushed up the Consumer Prices Index to 3% in September - a rate not seen since 2012 - and recent sluggish growth has led to fears of a prolonged slowdown.

The Bank has a supplementary goal of supporting economic growth, which means it has faced a tricky trade-off over the past year.

How rates are set

While there are eight MPC meetings a year, Bank policymakers meet several times before casting their votes.

This includes a designated pre-MPC meeting, where Bank of England economists provide committee members with a whistle-stop tour of the economy a week before the interest rate decision.

During this session, policymakers are shown dozens of charts on all aspects of the economy.

Martin Weale, who served on the committee between 2010 and 2016, says these meetings sometimes influenced his vote.

The King's College London economics professor says: "I remember when I joined the MPC in July 2010, I wondered how long it would be before I thought I was voting differently through going to the meetings from the way I would have voted had I been looking on from the outside.

"And the answer was that in January 2011, I voted for an interest rate rise because I saw the short-term inflation forecast that the Bank was producing.

"Bank staff suggested that inflation was likely to rise to 5%, which was what it did. Based on historical experience I thought that, as a result, wage growth would pick up and high inflation would become entrenched."

As well as economic data, the MPC is provided with reports from its regional agents, which are described by the Bank as its "eyes, ears and voice" across the UK.

David Miles, an economics professor at Imperial College London who served on the MPC between 2009 and 2015, says these reports were invaluable - especially during the financial crisis.

"In early 2009, everybody knew there had been a major financial event in the UK, the banks had got into terrible trouble in October [when HBOS and RBS were rescued by the taxpayer], but it wasn't yet clear from backward-looking growth data what the impact would be.

"But we were hearing from the agents that sentiment of companies was spectacularly dire.

"And that was why not only were interest rates cut to 0.5% in March 2009, but shortly after, we embarked on asset purchases [quantitative easing],which was bigger than anybody thought."

Following the pre-MPC meeting, policymakers meet for three days to thrash out their arguments.

Both former MPC members describe the committee's debates as "candid, open, lively and active", but Professor Weale insists that meetings were "always cordial - and never heated".

The discussions are chaired by Bank of England governor Mark Carney, while chief economist Andy Haldane circulates talking points agreed by the MPC earlier in the week.

The first day, usually a week before the vote, is used to thrash out initial arguments. Policymakers also agree on economic forecasts if an Inflation Report - or quarterly economic evaluation - is due to be published.

Officials usually hold their first policy meeting on the Monday before the vote. This is transcribed and published with an eight-year lag. The first transcripts will be made public in 2023.

Day three, normally on the Wednesday, is voting day.

Mr Carney puts forward a proposal on interest rates and quantitative easing he believes will command a majority. Anyone who disagrees declares what level of interest rates he or she would prefer.

The result of the vote is published on a Thursday, along with the minutes of the meeting.