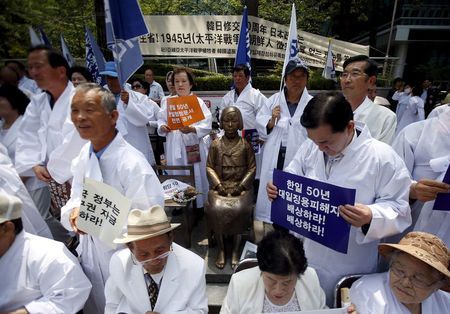 By Mari Saito and Ami Miyazaki

TOKYO (Reuters) - Early in December, dozens of journalists and editors from the Japan Times gathered for an emergency meeting in a glass-walled conference room in their brand-new 14th floor office.

On the agenda was a single, incendiary issue: the newspaper's new descriptions of how Japan compelled thousands of foreigners into military brothels and labor during World War Two.

In the past, the Japan Times described Korean workers as "forced laborers" and comfort women as those "forced to provide sex for Japanese troops before and during World War II."

But the five-sentence note published on Nov. 30 said the country's oldest English-language paper would refer to Korean workers simply as "wartime laborers."

The paper also said that because of the varied experiences of comfort women, it would describe them as "women who worked in wartime brothels, including those who did so against their will."

Such terms are social flashpoints in Japan and a topic of bitter dispute with South Korea, whose government argues comfort women were clear victims of wartime abuse.

The changes come amid simmering tensions; South Korea's Supreme Court ruled in October that Japanese companies must compensate South Koreans forced to work during the war.

The executive editor of the Japan Times, Hiroyasu Mizuno, told staff in the December meeting that he had two goals: to avoid creating the perception the paper was "anti-Japanese," and to increase advertising revenue from Japanese companies and institutions.

Some readers said the change glossed over Japan's wartime actions.

Prominent Japanese conservatives, meanwhile, applauded the move, calling it a coup for nationalist activists agitating for English-language news outlets to change such descriptions.

In an email, Mizuno told Reuters he and senior editorial managers decided to revise the paper's descriptions to "better reflect a more objective view of topics that are both contentious and difficult to summarize."

He said the Nov. 30 note did not signal a change in the paper's editorial direction, adding: "I categorically deny any accusations that The Japan Times has bowed to external pressure."

The Japan Times has an outsized impact on how the country is perceived abroad - it is distributed in Japan with The New York Times - and is seen domestically as an unofficial style guide for other English-language outlets.

A New York Times representative said that the editorial operations of the two organizations were separate, and that the paper used precise language on the topic and would continue to do so.

Reuters interviews with nearly a dozen Japan Times employees - all of whom requested anonymity out of fear of reprisal - along with hundreds of pages of internal emails and presentation materials, show the editorial changes started taking shape when the paper changed hands in June 2017.

Some media critics say self-censorship is a problem in Japanese newsrooms, fed by fear of losing access, advertising revenue and subscribers.

In the past, Prime Minister Shinzo Abe and his top aide, Yoshihide Suga, have singled out the liberal Asahi Shimbun for criticism, including over its articles on comfort women and the Fukushima disaster, some of which it later retracted, citing errors.

Suga told Reuters the government would not comment on media companies' editorial policies, including those of the Japan Times.

For instance, an Australian-Japanese organization that protests comfort women statues, saying the monuments feed anti-Japanese sentiment, along with Kent Gilbert, a well-known conservative commentator and lawyer who has worked in Japan for decades, petitioned Asahi Shimbun last year to remove "forced" from its description of comfort women.

The paper did not amend its wording, saying in a public statement that it took care "to use the most appropriate phrasing" for stories.

Similar pressure led the conservative Yomiuri Shimbun to apologize to readers in 2014 for using "sex slaves" to refer to comfort women in its English-language edition.

"The Yomiuri Shimbun apologizes for having used these misleading expressions," the paper's English site said in a statement at the time.