The 8 Biggest Small Business Trends for 2018 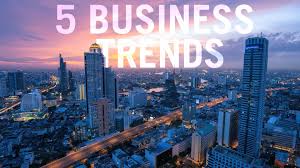 Despite our best intentions, it’s almost the end of the year and most of us haven’t run a marathon or fixed that weird noise our car makes. 2017 is on its way out, and while much remains the same a lot has changed for the better.

The markets are up, unemployment is down, and consumer confidence hit a 17 year high in October. This all means that Americans have more cash in their hands, and are more willing to spend that cash than they have been in years.

As we move into 2018, some of this momentum will continue, some will get lost, and—hopefully—we’ll pick up some new steam as well. Below, we look at 10 trends small businesses should keep an eye out for in 2018 and some ways to prepare for them.

1. A bubble, somewhere, will pop

There’s a bubble out there, but no one is really sure exactly what this means or where it is. Stocks have risen to crazy heights, with price-to-earnings ratios well above their “normal” ranges. The housing market has rebounded in such a way that talking heads are calling home ownership “an escalator to wealth.”

2018 seems to be pushing hard for a burst bubble. According to The Economist, “The hunger for assets that is driving up prices is also leading investors to take more risks—risks which may not be fully priced into their investments and which they may not fully understand.”

If we’re, en masse, investing in things we don’t really understand, chances are we’re about to have the rug pulled out from under us. Higher prices also mean less room for error.

When prices for houses and investments are at a reasonable level, people make purchases without overextending themselves. When earning a higher return requires paying a higher premium, people have to dip into their financial buffer to receive an adequate return.

What does all this mean? People have less in the tank to draw from if things go south and could be forced into selling at a loss to cover their daily expenses. Then the cycle repeats.

The good news is that we’re already hesitant about our current bubble. People aren’t celebrating their newfound wealth like they did in 2007 and 2002 just before past bubbles popped.

2. Millennials will get their say

One of the reasons people might be reserving their monetary leaps for joy could be that a lot of the people getting richer are millennials, a notoriously anxious and cautious group.

Millennials currently spend on the order of $600 billion every year. As that number grows to an estimated $1.4 trillion in 2020, more and more businesses are catering to millennials. In practice, this means more experiential sales and marketing, less emphasis on glitz and glamour, and a push for consumers to “connect” with brands.

Values-based selling is already on the rise, with campaigns such as State Street’s Fearless Girl and Apple’s “Shot on iPhone” seeking to make deeper connections with millennial consumers.

If all this isn’t your cup of tea, I’ve got bad news: millennials are here to spend money and everyone is courting them. As a generation, they’ve seen their parents’ savings wiped out, they’ve exited college only to enter one of the worst job markets in decades, and they’ve lived through some of the worst attacks to ever take place on American soil.

As a result—they’re not overly excitable.

The internet of things (Iot), artificial intelligence (AI), and machine learning (ML)—or Iotaiml—were the buzzwords that Big Tech couldn’t stop talking about in 2017. Expect more of the same in 2018.

While the terms themselves have reached an almost parodistic level, the ideas behind them are having greater effects every year. Small businesses now have access to many of the benefits of these technologies at low or no cost.

The IoT is fueling hyper local advertising and search (more on this below) while allowing businesses to track shipments and customers like never before. AI lets you turn a bunch of seemingly random data into actual insight about the way customers are interacting with your business.

All the while, ML is pushing your products and services to the best customers on Amazon and Facebook. Iotaiml represents a suite of tools and tech that can help small businesses increase revenue while avoiding rising costs.

4. “Made in America” will make its return

Okay, “Made in America” hasn’t really gone anywhere, but it has been a smaller movement in recent years. Back in the ’80s, Walmart launched a “Buy American” ad campaign and pushed for products made in the U.S. in its stores.

This year, American products and jobs have often been a focus of the Trump Administration, leading to a reevaluation of U.S. trade agreements and tariffs. While it’s simmering as a social issue right now, in 2018 American made will be a big deal.

Manufacturing in America has been on the rise since 2010, after falling steadily from the mid-1980s. Adidas and Under Armour are building manufacturing plants in the U.S., and companies that make difficult to ship items—cars, heavy machinery, and the like—are also onshoring jobs.

The real push in 2018 will have to come from consumers. Large enterprises are becoming increasingly consumer-led, as revenue growth once again takes precedence over cost cutting. By increasing their top line more quickly, businesses can make up for squeezing their costs to the limit during the recession.

The Equifax hack was just the most recent and galling version of what’s in store for us. As more and more of our data is put online, it increases the incentive for hackers to find ways to gain access to it. The U.S.’ relatively lax punishments for businesses that lose information to hackers compound the problem.

Equifax lost the personal information of 145 million Americans. As a result, the company’s stock is down about 15% year over year. Yes, you read that right: only 15% for affecting 145 million Americans. Under Armour’s stock value lost more than that in a single day, just for saying it was going to sell fewer shoes.

With nothing to lose for inactivity, large corporations will continue letting standards slide, which means you and your customers are going to have to deal with the repercussions.

Payment processor Stripe, for example, “[provides] detailed information about disputes and fraud so you can be as informed as possible as users are ultimately responsible for them.” That means, if you accept a fake card, you’ll be paying the price for it.

Previous Article:End of an era: Millennials brought about the downfall of one of America's most iconic beer bran

Next Article:Physical vs. Digital Advertising