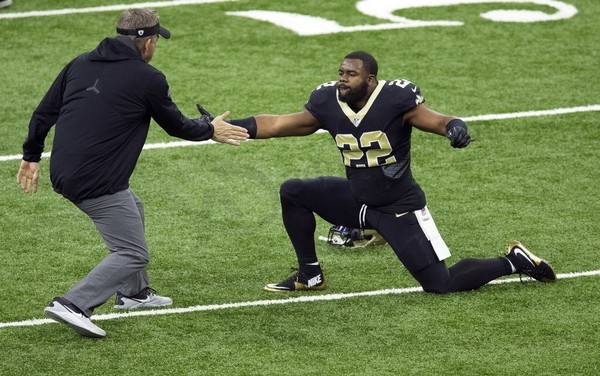 The New Orleans Saints had a blank gold banner hanging in their indoor practice facility this week.

"You can kind of look at it and fill in the blanks yourself," coach Sean Payton said Friday.

The hope for the Saints is to replace the empty banner with one that says "2017 NFC South Champions."

"It's unfinished, and we've talked all week about finishing the right way," Payton said.

To anyone who thinks the Saints (11-4) might overlook the Tampa Bay Buccaneers in Sunday's season finale, the empty banner should prove just how much New Orleans wants to win this game and claim the NFC South title.

The team doesn't hang banners in the practice facility for earning a wild card spot, so there isn't one from the Saints' last playoff appearance in 2013, which Payton reminded players this week. The Saints finished 11-5 that season, and a Week 16 loss to the Panthers, who went 12-4, proved to be the difference.

"Coach said they should've had another banner in '13, (but) they lost to the Panthers," second-year safety Vonn Bell said. "So, he wants it. That's what we want to do. We want to be in history, so when we look up (in) the indoor (facility), we're like, 'We did it.'"

The Saints last won the NFC South in 2011, and running back Mark Ingram, who was a rookie that year, said the chance to be division champions again provides plenty of motivation.

"You want to have your own legacy," Ingram said. "You see all those teams up there that won something, (and) they did something special. It's not easy to win a championship or easy to win your division in this league."

Of course, Ingram and other players hope the division title isn't the only one the team wins this year.

The Buccaneers enter Sunday's game 4-11 and on a five-game losing streak. For the Saints (11-4), a loss Sunday wouldn't necessarily impact their postseason potential, but it'd be much better to enter the playoffs on a three-game winning streak and with the NFC crown.

"We're all trying to finish this season off the right way and get that division title," defensive tackle Tyeler Davison said. "That was the goal at the beginning of the year. We have a chance to accomplish that, and we're going to do everything we can to make it come to fruition."

The Saints can still win the division if they lose Sunday. If the Panthers (11-4) lose to the Falcons (9-6) on Sunday, the Saints will back into the NFC South title. But the Saints would much rather add that banner in style.

"That's what we want," Bell said. "We want to be remembered."

Next Article:New Year’s resolutions that will help you protect your digital life