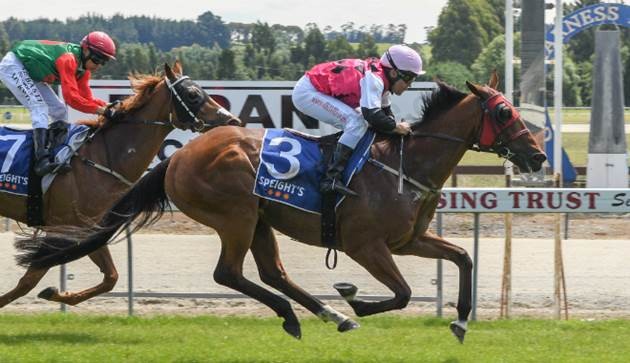 The $20,000 Rating75 contest went the way of the seven-year-old gelding, giving him his fourth win on the trot. The Stephen Blair-Edie trained galloper had to be good to win after settling some distance off a solid speed set by Consolidate.

Former North Island jockey Lee Callaway has been the rider in each of He Ain’t Heavy’s four recent wins and knows the gelding better than most.

He’s now won seven times aboard the son of Kingmaker, owned by the trainer and his three sons Tim, Dean and Jock Blair-Edie in partnership with Warren Hislop and the latest win was Callaway’s 200th since he began his career in 2002.

Callaway was never concerned during the running; always confident his mount would reel in the leaders.

“He still had another gear,” Callaway said. “He finished really well and is racing in great form.

“A couple of years ago I wouldn’t have thought he would perform on firm tracks, but he likes them more the older he gets.”

The Gore track started the day at Dead5, was upgraded to Dead4 before another upgrade to Good3.

He Ain’t Heavy proved too good for Can You Hear Me who fought well for second while Shakti ran on strongly for third.

His trainer is unsure of where or when an attempt at win five in succession will take place but will look around for an open class assignment in a month or so.

“He’s a magic wee horse,” Blair-Edie said. “He’s such an easy horse to have in the stable, he’s special.

“I thought Come Fly With Me was the stable star but now we might have two.”

Come Fly With Me has won 11 times with He Ain’t Heavy catching up fast with Sunday’s seventh career success.

Next Article:A historian on the myths of American trade