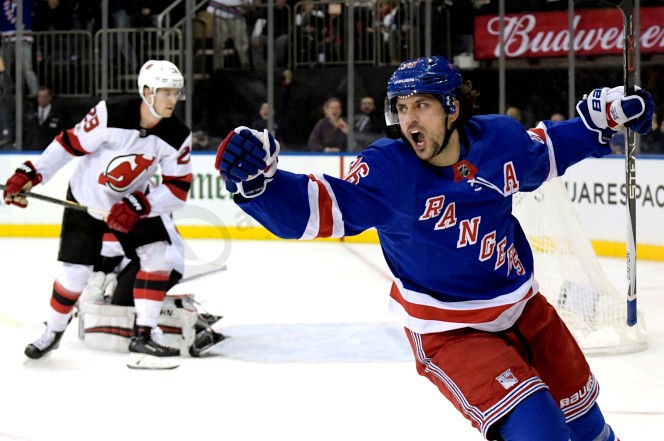 This doesn’t feel like more than a month away from the All-Star break — at least not around the Rangers and not around the Metropolitan Division, where points are tough to come by and every one of them is incredibly meaningful.

That’s something the Rangers know, and that’s why they were so proud of the 5-2 win over the talented Devils on Saturday night at the Garden. It was a game quite a bit closer than the score indicated, but a game that the Blueshirts held the play throughout.

“There’s no time to relax, you just have to keep going,” said goalie Henrik Lundqvist, who made 26 saves in his second start in as many days, the team rebounding from their 4-2 loss the Capitals in Washington on Friday. “The way the league is shaping up this year, it’s going to be a tight race. Our division is so competitive that we have to continue to push ourselves here. But it’s been a good week.”

That would be a week when the Rangers (16-11-2) took three-of-four from their Metro counterparts — but gaining ground? They remain one point behind the Penguins and Islanders for the second wild card, while five points shy of the first-place Blue Jackets, with the Capitals and Devils (16-9-4) between. It’s a six-team pileup, and moving up is a lot tougher than moving down.

“If you win a couple, you’re not going to gain that much,” defenseman Marc Staal said. “It’s hard to put teams behind you, and it’s harder to catch them.”

Coach Alain Vigneault knows that point, which is why he went to Lundqvist on back-to-back nights, explaining the decision by saying it was a “big game.”

Does that mean when backup Ondrej Pavelec starts again — likely the next back-to-back, starting with the Kings in the Garden on Friday followed by Saturday in Boston — it’s not going to be a big game?

Well, no, because no matter who is starting, this past week has already given the indication that the urgency is rising. That was also felt when Vigneault had an update on top-line center Mika Zibanejad, saying he is “progressing” in his recovery from a delayed onset of concussion symptoms, which has now kept him out of five straight. Zibanejad is needed most notably on the struggling power play — 0-for-3 against New Jersey, and 3-for-33 over the past 11 games.

“He’s doing well, and he’s coming along,” Vigneault said, adding that Zibanejad has not been cleared for contact and is going to need at least one practice before being considered for the lineup. “I think [Saturday] was a very positive day for him. Not exactly sure what the timeframe is, but I do know he skated hard.”

And so did the Rangers from the drop of the puck in this new incarnation of the Hudson River Rivalry, one where the Devils’ young speed and skill is undeniable. But the Blueshirts jumped on them early with Jimmy Vesey’s sixth of the season 6:14 in, followed by Jesper Fast’s third in three games (and sixth in eight games) to make it 2-0 midway through the second.

The Devils pushed with a goal from Damon Severson to make it 2-1 at 13:45 of the second, and they had a golden chance to tie it when Brendan Smith took a delay-of-game penalty moments later. But after Marcus Johansson hit the post on the power play, Mats Zuccarello was able to strip Severson of the puck and score was was essentially a shorthanded goal (just two seconds after the penalty expired), giving his team the momentum with a 3-1 lead.

Zuccarello added another 6:21 into the third, and then Miles Wood and Kevin Hayes traded tallies later in the period to finish things off.

It almost sounds silly to call it a big win, but just comparing Lundqvist’s change in demeanor from Friday in Washington to Saturday on Broadway told the whole story.

Previous Article:This smart urinal will show you ads while you pee

Next Article:Little Indian banned for 12 months