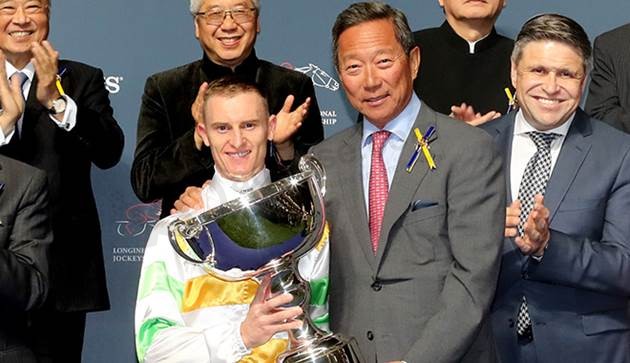 In doing so, he saw off the spirited challenge of UK representative Silvestre de Sousa, with French champion Pierre-Charles Boudot taking third spot on the podium.

This was a popular local victory - of sorts - for Purton, who has a large fan base among Hong Kong racing fans. He has been riding here since 2007, was champion jockey in the 2013/2014 season and has more than 750 victories in his Hong Kong career to date, and was competing in the IJC for the fifth time.

However, he was ranked among the outsiders in Jockey Challenge betting and was at one point rated a 25-1 chance for victory, well behind favourites Ryan Moore, Boudot and reigning champion Hugh Bowman.

The IJC opening ceremony had barely closed with a fanfare of fireworks, before minutes later Hong Kong's Purton lit one of his own when driving home Our Hero to take out the first leg of the Championship for trainer Danny Shum. Settled in mid-division, Purton produced Our Hero with a telling run in the stretch to hold off De Sousa and See Me Now by a short-head, with Moore on the Richard Gibson-trained Forever Posh taking third spot a further neck away.

Purton said of his ride: "I had a beautiful run. Danny said he was in the groove today."

Purton's lead in the Championship was short lived, however, as De Sousa made virtually all in the second leg to drive home the Caspar Fownes-trained Peace Combination by a diminishing length.

Defending champion Bowman was second aboard the David Hall-trained Dr Proactive, with Boudot hitting the scoreboard and grabbing four points for his third-place finish, a length and a quarter adrift of the winner, on Exceptional Desire.

"We went a good gallop, and I was able to get a breather into him around the bend," de Sousa said.

"I filled him up again in the straight and he ran on. Caspar told me he was in as good a shape as he could get him."

Purton's response to De Sousa's lead was emphatic in the third leg, as he drove the Peter Ho-trained Let's Take It Easy - drawn wide - in gate 10 to take the race from Bowman aboard Sparkling Sword, with Leandro Henrique scoring his first points of the evening on Destin back in third.

"He's been racing well and it was a good move by Peter to bring him back to the Valley. He was my best chance on the night and he's got the job done," said Purton of his winner, who almost guaranteed that the 2017 IJC title would be his.

At this stage of the competition, only De Sousa could deny Purton the crown.

In any event, neither jockey featured in the finish of the fourth leg as Boudot drove home the John Size-trained Bank On Red, the Frenchman recording his first win at Happy Valley on his first ever night at the track. This was a happy outcome indeed for the jockey, who will start a short term contract with the Hong Kong Jockey Club in January.

"I thought it would be really important to win a race tonight with a view to my stint here in January and February," he said. "Monsieur Size gave me orders to the millimetre and the race worked out exactly as he predicted. To finish on the podium in the Championship is the cherry on the cake."

Following the trophy presentation, a delighted Purton said: "I came into tonight thinking that I had quite ordinary rides, but it turned out well, and I'm pleased to have won, as I've gone close a couple of times. I didn't want it to be another déjà vu. You need a lot of luck, and I got it in two races!"