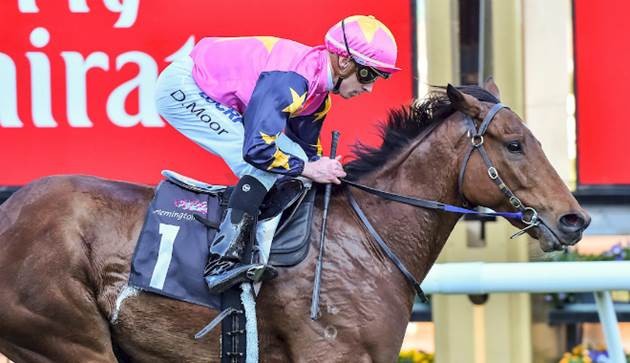 The three beaten horses in the finish of the Ballarat Cup are the only ones above the 54kg minimum in Saturday's $250,000 Sportsbet Pakenham Cup (2500m) - De Little Engine, Grey Lion and Oncidium Ruler. De Little Engine was flashing late for fourth at Ballarat, and Daniel Moor goes on to the 60kg topweight, while Ben Thompson, who rode at Ballarat, is aboard the low-rater in the race, Khartoum, for Pat Carey. Among the other notables, the prominent Gai Waterhouse/Adrian Bott and Stephen Baster union continues with Goodwood Zodiac in the Cup from barrier 12 of 13. Transfer Allowance, Peter Roche's only horse, is also the only local horse in the feature, with Caulfield Cup-winning hoop Cory Parish taking the ride.

Last year, Patrick Payne's charge Invincible Al upset the $1.60 favourite, the previously unbeaten Wise Hero, in the Benchmark 70 race on Cup Day. Cranbourne trainer John Price has Wise Hero, three wins from five starts now, running fresh in the John Duff & Co BM78 Handicap (1000m), while Invincible Al won first-up at The Valley in November heading into this contest. Interestingly, Ben Allen - who rode Wise Hero on this day last year - rides the stablemate King River this time around, with the horse on debut for Price having transferred from Grant and Alana Williams in WA. The six-year-old is one of prominent owner Bob Peters' horses, and is racing for the first time in more than 12 months. Invincible Al was Tahlia Hope's first metro winner on this day 12 months ago, and having chalked up her second city winner on him at The Valley on November 17, she retains the ride with her 3kg claim.

Group 1 winner Howard Be Thy Name continues what is just his third racing preparation on Saturday, in the $100,000 Schweppes David Bourke Memorial (1600m). An SA Derby winner in a long opening prep to his racing career, the Darren Weir-trained galloper then stepped up to open company in the spring of 2016, and wasn't disgraced given the circumstances - finishing within six lengths of Black Heart Bart in an Underwood Stakes second-up. With his fresh run under his belt during the Flemington Carnival, he's second-up once again - and is the class runner of the field with John Allen taking the ride from the fence draw.

Eden's Major player a Star in the making?

Trainer Shea Eden thinks his progressive staying prospect Star Major could yet be a bit of a freak, despite having had just the two starts in his career to date. For start three, he jumps in the Sportsbet Power Play BM70 Handicap (1600m) on Saturday, although it might pay to note he wanted an easier target for him at Bendigo on Wednesday but copped an awkward draw. The barrier gods weren't the best again with 11 of 15 as it stands, but with Eden's trusty associate Nikita Beriman in the saddle, he'll be a runner to watch.

From Darwin... to Pakenham

Trainer Neil Dyer does a lot of shuttling to NT from his Kyneton base, and he brings back the Darwin Cup winner Royal Request to run first-up in the $120,000 Racing.com VOBIS Gold Bullion (1400m). Jarrod Todd continues the association that saw him win three times on him last prep in the Top End, including the $200,000 Cup, and has won five times on him overall from 13 rides.