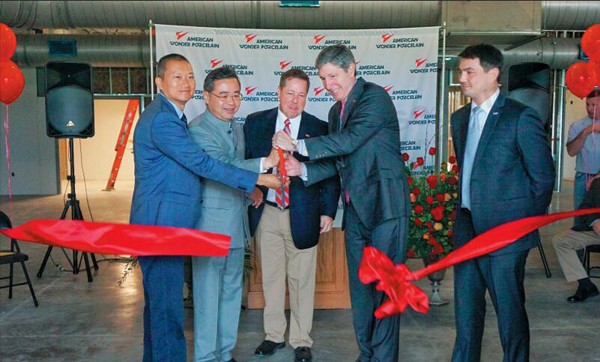 Frank Chen, the CEO of Sinomax USA, had been looking for a location for some time.

Logistics were developing into a challenge as "bedding products are bulky, and it takes a lot to ship them a long distance", he pointed out.

So in 2013, when retail giant Wal-Mart Stores Inc unveiled a plan to bring back manufacturing jobs to the US, Chen decided it was time for his Hong Kong-based company to find a stateside location. He went for Tennessee.

For Jianping Huang, chairman and president of The Wonderful Group, based in Dongguan, Guangdong province, proximity to the US market was a key factor in opening a US ceramics plant.

"We want to be near our customers in the US," Huang said. "The American ceramic industry imports about 70 percent of its product, with about 13 percent of that coming from China. Setting up this factory is better for our customers."

Chinese companies have provided a boost to the southern state's economy in recent years, whether it's building a new plant or retrofitting an old factory.

Data from the state's Economic and Community Development department in 2015 and 2016, showed Tennessee attracted $3.18 billion of foreign direct investment. China accounted for about $270 million of that and helped create more than 1,000 jobs.

The TN China Network, a trade promotion group, confirmed that by June there were 47 companies in the state that received Chinese investment.

According to the New York-based Rhodium Group, the top four industries for investment are health and biotech, followed by automotive and aviation.

All this has a local impact.

"We were happy that the Chinese were coming. Any investment is a big deal for us because it helps our local economy," said Bernie Ash, mayor of Lebanon, Tennessee, upon learning that The Wonderful Group would invest $150 million and open a porcelain plant in his hometown.

In La Vergne, 27 miles southwest of Lebanon, more than 500 jobs were lost when Whirlpool Corp closed a plant there in 2008.

Sinomax USA recently opened a factory and will eventually employ more than 300 workers.

"We are happy to see the facility back in use, and we hope that a lot of La Vergne residents will be able to get jobs there to support their families," Richardson wrote in an email.

Ceramics have also become important to the state.

Porcelain was developed in China more than 2,000 years ago before being exported to Europe and the rest of the world.

The American Wonder Porcelain facility signifies the first investment in the US from a Chinese ceramic tile manufacturer. The Wonderful Group is a division of Marco Polo, which is the largest producer of ceramic tiles in China.

Its factory is adding to Tennessee's roster of ceramic plants－there are now six. Indeed, that was a major reason why the Wonderful plant was rolled out in Lebanon.

"Other ceramic factories are in Tennessee－there is a good supply of raw materials, and the Tennessee government welcomed us here," Huang said.

Previous Article:Nation on track for 5 maglev lines by 2020

Next Article:Buffett cashes in on crisis-era GE shares