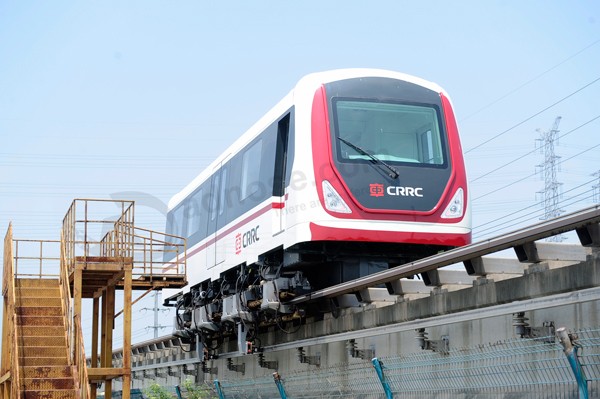 China will operate more than five magnetic levitation rail lines with maximum speed of 160 kilometers per hour in cities including Chengdu, Wuhan and Guangzhou by 2020, manufacturer CRRC Dalian Co Ltd said on Monday.

A new generation of Chinese medium-to-low speed magnetically levitated or maglev trains, manufactured by CRRC Dalian, a subsidiary of China Railway Rolling Stock Corp, completed test runs at a test speed of 120 kph in Shanghai this month. The vehicles are expected to enter the market within a year.

"Even though metro trains can meet the demand to transport a large number of passengers from one location to another, it is too costly to build the infrastructure and difficult to control the noise," said Qu Tianwei, chief engineer with CRRC Dalian. "In addition, they cannot run very fast."

The new maglev train's maximum operating speed can reach 160 kph and has advantages including low vibration and noise, a stronger climbing capacity and a shorter turning radius, after eight years of research and development by both CRRC Dalian and Chengdu-based Southwest Jiaotong University.

"The medium-to-low speed maglev trains can better connect cities and suburbs, and can be exported to foreign markets," said Qu.

More than 12 Chinese cities, including Tianjin, Hangzhou and Shenzhen, are planning to launch maglev services by 2020, especially between their city center and airports, the city and suburban areas, and the city and surrounding counties.

China has already developed the technology to run maglev trains at a speed of less than 100 kph. As the test line in Shanghai was only 1.7 kilometers long, tests at 160 kph could not take place. Qu said that led CRRC to build a new test line at a length of between 5 and 6 kilometers.

"Compared with other types of urban rail transportation, maglev trains are quiet and can achieve high speeds because they don't actually ride on the rails with wheels but hover centimeters above the track through the use of magnets, avoiding the slower speeds caused by friction," said Sun Fuquan, a researcher at the Chinese Academy of Science and Technology for Development in Beijing.

Beijing is building a low-speed maglev urban rail route－the S1 line－which will start in northern Beijing's Haidian district, pass through Shijingshan district and end in Mentougou district in the city's western outskirts. The 11km line will become operational during the fourth quarter of this year.

China's first medium-to-low speed maglev rail line started operation in 2016 in Changsha, the capital of Hunan province, making China one of the first nations to master such technology.