Amazon and Alibaba battle it out in Asia 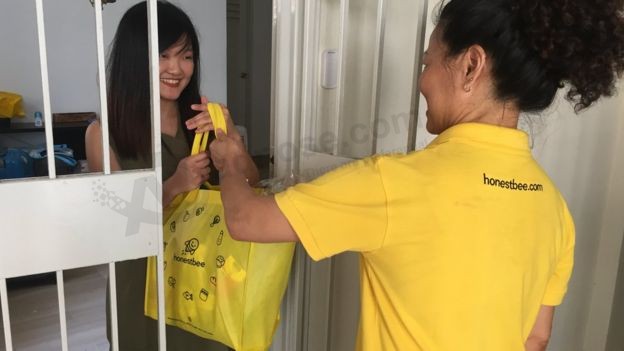 Meet Rosanita Ali, she's a 49-year-old housewife who hasn't worked for the last 10 years. Until recently, that is.

Rosanita spends her days picking up fresh foods and groceries for shoppers who send her orders via the HonestBee app.

"It gives me the flexibility to work when I want," she tells me as she walks around a supermarket, inspecting fruits and vegetables. "And I can earn an income too."

Rosanita says she makes $100 (£76) a week on average, working about two hours a day. But she could make much more if she wanted, because there's no shortage of orders.

"From the product point of view, consumers [in this region] are seeking a more sophisticated experience," Joel Sng, HonestBee's founder and chief executive tells me in his downtown Singapore office.

He built the business from scratch two years ago and started it here in Singapore. It's now expanded into eight markets across the Asia Pacific region.

Mr Sng says the company could make a profit if he wanted to take money out of the business, but has chosen to focus on growing it instead.

He is excited by the growth potential, given that less than 2% of people in South East Asia currently shop online. And those that do are mostly young.

Data from Google and Singapore-based sovereign wealth fund Temasek show that the e-commerce sector in the region is expected to skyrocket in the next few years, from $55bn (£42bn) in 2015 to $88bn in 2025. And these are just conservative estimates.

All of this activity in the e-commerce space is what convinced US global online retail giant Amazon to launch the Prime Now service in Singapore last month.

It has set up a 100,000 sq ft (9,290 sq m) facility in Singapore - its largest warehouse in an urban centre - and is offering the two-hour delivery service for everything from eggs to baby strollers.

"Singapore consumers are busy; they love convenience and love the idea of having a range of products… This matches our proposition exactly."

But Singapore isn't the ultimate prize. It's a tiny market of just five million people. The wider region is what's at stake - a market of potentially 600 million customers.

Amazon isn't revealing right now what its plans are, but with its recent entry into Singapore - Australia is next - the signs of expansion are clear.

But what works in Singapore and Australia may not necessarily work elsewhere in Asia - especially not in South East Asia.

"Some of these countries will be very challenging given the kind of infrastructure we are talking about in Indonesia and Thailand, for example," says technology watcher Ajay Sunder of research consultancy Frost & Sullivan.

"One of the other problems is payments. Cash on delivery, especially in emerging markets, is a problem."

While countries like Singapore have an established e-commerce payments system and customers who are comfortable paying online, other countries don't.

This means they have to rely on a network of agents who collect cash on delivery - a much less efficient system that is also vulnerable to fraud.

It's also a very competitive space, with China's Alibaba dominating the region throughits acquisition of Lazada, which in turn owns Singapore-based Redmar