As the new year approaches, it’s time to start looking into what the big advertising trends of 2017 are likely to be and see how they can work for you. As with any new year, though, it’s also a good time for a little reflection.

2016 brought a few new things to the table, and we’re likely to see a continuation of some of them, making them fully blown advertising trends in 2017. Some big trends from 2016 were also around way before that but started to peak in a big way during the year. Things like programmatic advertising, and the use of HTML5, have become common now, almost required, rather than a unique approach.

So what are we going to see more of in 2017? What’s going to take the advertising world by storm? Here are just a few of the possibilities…

This sounds far, far more sinister than it actually is. It has nothing to do with the ‘dark web’, or anything close, but has everything to do with brands trying to contact their audience in a more personal and direct way.

The actual meaning of isn’t directly related to messaging, though. Dark social refers to sharing links and content where the click through rate and success can’t be measured by traditional web analytics tools. In more practical terms, though, this means content which is shared through private messaging apps, texts or email, rather than shared on social media.

The ‘dark’ part of the name means that the referral data can’t be tracked, so the site which you’re linking too can’t track directly where the traffic from dark social originates.

Adidas have already used this as a really effective marketing tactic. They looked at which messaging apps were most popular in which places, and recruited ‘squads’ (brand advocates, basically) around the world with the focus on creating hyper local communities that would consume Adidas content, shared with them by these squads.

In Europe and the US, Adidas primarily used Whatsapp, and in Asia it was Wechat. The theory was that people using these apps already create their own micro-communities, so why not be the brand that creates their own? By using their brand advocates, they can access more data on how content is shared, consumed and discussed on these channels, and form a closer relationship with their audience.

So, moving into 2017, how can other brands take advantage of Dark Social? Well, Facebook has seen the trend that most content is shared and clicked on through their Messenger app, so they’ve updated it to allow brands to contact their followers (or people who have liked their page) directly. 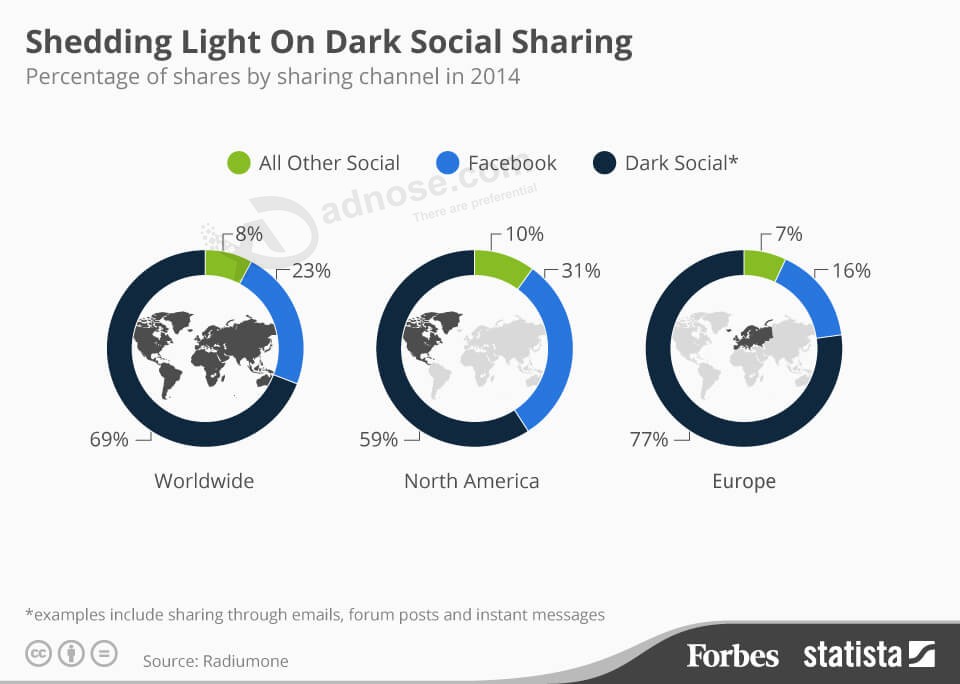 This can be used to send links, discount codes, or interesting content which is more targeted, relevant, and personalised. This also sheds some light on Dark Social, in some respects, as it allows the brands to analyse how successful their messaging campaigns have been.

There’s huge potential in Dark Social, and such a wide range of platforms and messaging apps to try and utilise. The key is to try and create your own communities, as a brand, and engage with them in interesting and meaningful ways. Of course, the analytics may be difficult to get hold of, but using this in conjunction with other ad campaigns can really give your brand and business a boost.

Be careful though. After all, would you really want private messages from your local supermarket about offers on food going out of date soon? Your messaging strategy needs to be carefully considered, and well suited to the format.

Taking inspiration from Agile ways of working in other industries, marketers have now begun to adopt the methodology for ad campaigns, but what does this mean?

Essentially, it means marketing in a more reactive, responsive way, which helps campaigns in both their relevance and effectiveness.

One of the fundamental concepts behind working in an agile way is working in sprints. So you define targets in the short term, as well as what you need to do to achieve them. Then at the end of each sprint, you measure the success of the project and optimise, and respond to what you’ve learned.

It can revolutionise the way a marketing and advertising team works, but one of the biggest fundamental gains is that it allows you to respond quickly to external factors, and keep your marketing campaigns up to date and relevant, whilst constantly ensuring that your efforts are efficient and fully optimised.

After all, a lot of marketing teams in days gone by have been relatively slow and inflexible. There are usually a number of different parties involved in making an ad campaign, so communication and decisions could take forever. When the success of a campaign can depend entirely on what’s happening at a particular moment, this is not an effective way to work.

This is why more marketing teams are going to be adopting this way of working in 2017, and it’s definitely something you should be looking into for your own company. It gives your marketing efforts real focus, and allows you to keep everything you do completely relevant. Not just your external advertising efforts, but the way you work within the team too.

If you do it well, it will help your efforts stand out from the crowd, and can revolutionise the way your team works. Teams that have adopted it already have seen a noticeable increase in productivity, so why wouldn’t you want the same for your own company?

3.Social advertising will continue to be huge, but only on the right networks

Spend on marketing through social media continues to rise by huge amounts each year. Back in 2015, spending hit nearly $24 billion, and in 2017 it’s expected to exceed $35 billion according to emarketer, which would make up around 16% of total digital ad spend. It’s a part of the landscape that will continue to grow, but the key to making the most of it isn’t just to increase spend, but to identify where to spend your cash.

Take Twitter, for example. It’s still a hugely popular platform for the users, but the advertising just doesn’t work. Spend has stagnated, and the format just doesn’t resonate with people. Think how many times you have seen a relevant, interesting ad on Twitter. Now try to remember if you ever actually clicked on one…it’s a struggle, right?

The truth is, it’s probably not the right platform for advertising in its current state. People tend to scroll quickly through their Twitter feeds, so you probably have around a second to grab the user’s attention, but then you’re in direct competition with the accounts they actually follow, so you’re off to a tough start.

Couple that with the fact that the targeting often seems a little off, meaning you can’t be sure how relevant your ads are to the users seeing them, and you could be throwing money away if you’re spending a lot on Twitter ads.

Contrast this with advertising on Facebook, where spend is increasing massively and brands are having real success, and it’s easy to see what the trend is for 2017. Spending money on social advertising, but in the right places.

Whether that’s Facebook, Instagram, Snapchat, or any other network that explodes during the coming year, you need to identify first which your audience uses most, and then how to communicate with them most effectively.

What is obvious is that social advertising will continue to grow, and continue to be one of the most innovative, personal ways to communicate with your audience.

We wrote about the use of Augmented Reality (AR) in marketing earlier in the year, and noticed that over the next few months the post really started to gain traction. This is a sign that more and more marketers are looking at how they can take advantage of AR to reach a wider audience in more interesting ways.

Previously, the use of AR was mainly thought to be restricted to expensive, bespoke headsets, like the Hololens which is to be released by Microsoft. It was only when Pokemon GO was released, along with Snapchat filters getting increasingly popular, that companies realised to utilise AR, all you really need is a smartphone.

The question is, how will this affect the advertising industry in 2017? Well first off, it’s likely that we will see more apps which utilise the functionality, and advertisers will try and get various ads shown in-app, but this is quite a narrow way of looking at the possibilities.

More companies will start to make their own apps or features with AR functionality, like Gatorade did with their Snapchat filters. We could even start seeing blank billboards, which when you look at through the screen of your phone, become something much more exciting.

Think along the lines of the screens in Lego stores. When you hold a box up to the screen, an animated version of what’s in the box appears on top of the box you are holding. It looks super cool, and really lights fires in the imagination of children and their parents alike.

Previous Article:7 Big Trends That Are Shaping the Future of Digital Advertising

Next Article:A+A Safety, Security and Health at Work - International Trade Fair with Congress