7 Big Trends That Are Shaping the Future of Digital Advertising

Mary Meeker's annual Internet Trends report is one of the most closely watched reports in the tech industry, and this year's presentation underscores the growth of mobile, particularly on social platforms that now control the bulk of ad spending and time spent by users.

Here's a look at seven of the most interesting stats in Meeker's more than 200-slide deck presented at Re/code's Code Conference today.

1. Desktop ad revenue is relatively flat, while mobile is exploding
Marketers are sick and tired of hearing about "the year of mobile," but Meeker's presentation shows that mobile is indeed far outpacing desktop-based ad revenue.

Internet ad revenue hit $60 billion in 2015, more than a 20 percent increase over 2014. Mobile ad revenue grew by more than 66 percent, while desktop was up just 5 percent.

Meanwhile, consumers are spending 25 percent of their time on mobile, which grabs 12 percent of ad budgets. By Meeker's estimation, that means there's a $21 billion untapped opportunity for U.S. brands to catch up with how people consume media.

By comparison, consumers spend 22 percent of their time on their desktops, and advertisers allocate 23 percent of budgets to desktop advertising.

2. It's Google and Facebook's game to win
Like it or not, Mark Zuckerberg has created an advertising juggernaut. Between 2014 and 2015, Facebook's ad revenue grew 59 percent, with the bulk of ads running on mobile devices. Meanwhile, Google's ad revenue was up 18 percent over the same time period.

While Google's increase may seem modest compared to Facebook's, consider that all other digital players contributed to 13 percent of total growth.

Together, Facebook and Google controlled 76 percent of internet advertising growth.

Ninety-two percent of 3,200 internet users surveyed said that they'd consider using an ad blocker, and 62 percent of people said that they are annoyed by preroll ads. The study also found that 81 percent of video ads are muted and require consumers to click to play sound.

The results should be taken with a grain of salt, though, since PageFair's technology helps publishers work around ad blockers and mobile ad blocking has only been "a thing" for a year.

5. Shorter is better
Meeker pointed to two Snapchat campaigns—one for Spotify and one for Universal Pictures' Furious 7—from last year as examples of how short videos work in mobile.

Universal sponsored a Live Story for Miami's Ultra Music Festival in March 2015 that generated more than 14 million views. And in December, Spotify increased subscription intent by 30 percent when it ran a campaign within the Discover section promoting its top artists of the year.

6. Millennials are still on Facebook
Despite constant reports that Facebook isn't cool for teens and young adults, the social platform still reaches the most millennials, according to the comScore data Meeker shared.

The data measured the average monthly minutes per visitor, with Facebook, Instagram and Snapchat claiming the most reach.

Interestingly, Yahoo-owned Tumblr only reaches a little over 20 percent of 18- to 34-year-olds but averages 200 minutes spent per user each month. Twitter meanwhile reaches more than 50 percent of millennials but averages considerably less time spent.

7. Chat is the future
Brands are increasingly embracing bots and chat-based marketing—and for good reason.

The chart below shows the quick rise of WhatsApp, Facebook Messenger and WeChat in the past six years and how they compare to site-based Instagram, Twitter and LinkedIn. 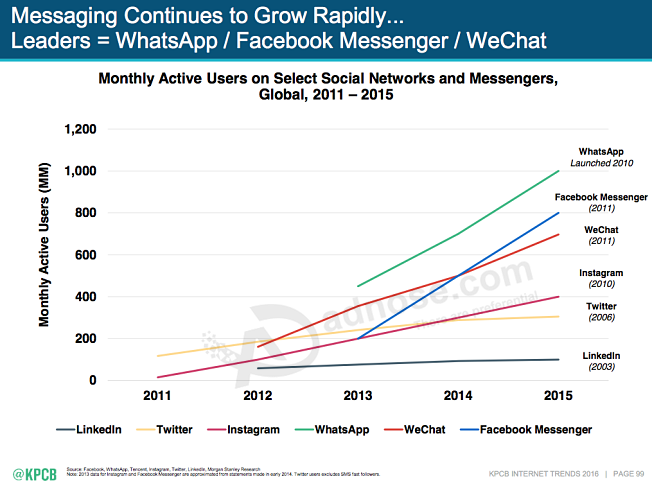 Next Article:Advertising Trends 2017 – A look at what’s hot in the new year