For the first time, 'Hamilton' is advertising in a big way. What does that mean? 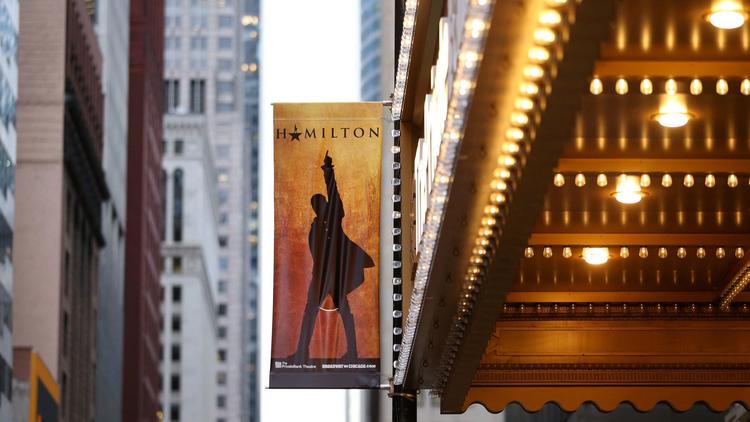 you have stared at the roof of a Chicago taxicab over the last few days, you may have been surprised by what you saw: An actual advertisement for the Chicago production of "Hamilton."

Until recent weeks, the blockbuster musical has sold virtually every ticket in Chicago with hardly any traditional media advertising — in fact, without much paid advertising at all. That was never the case in New York, where the promotional images from the show have adorned a building close to the entrance to Queens-Midtown tunnel, unmissable to anyone coming in from the airports by cab or bus. But, in a remarkable testimony to its drawing power, "Hamilton" has managed to play for almost two years in Chicago without needing any such promotion. It's unprecedented.

But that has changed in recent weeks. Along with the taxi ads, you're likely this fall to start seeing some billboards and TV ads for the show.

There's no shame there. Theater in its major centers often is a last-minute purchase, especially from tourists, and most long-running Broadway shows spend a small fortune on getting their title and promotional message in front of audiences. Big hits like "The Lion King" spend the most in Times Square, since they plan on sticking around and have learned the importance of remaining in their customers’ heads for their next visit, or when they have kids of their own to bring. "The Book of Mormon" doesn't skimp, either. And if you jump a shuttle from the Las Vegas airport to the Strip, you'll see ads for show after show, all jostling for your attention.

Of course, if you don't have to spend that money, the more profitable your endeavor becomes.

So why now go to such expense in Chicago?

Obviously, demand has softened. "Hamilton" can't rely on free publicity (this column notwithstanding) as easily and often as it could in the early days of its run. I recently looked at the availability of tickets for next Tuesday and found plenty of open seats in the orchestra at the standard top price of $172 (premium seats are more). By the time Tuesday comes around, I don't doubt that all of those seats will be filled. And weekends are a tougher proposition for buyers. But if you've not seen this show, the weeks in early September are a fine time to go. Early next year, more touring companies of the show are rolling out, which means that the national inventory will increase. As I've written before, at least one of those companies will land near Chicago.

There's another factor, though: Chicago's impending launch of "Hamilton: The Exhibition."

That attraction — a tented, walk-through, educational and entertaining attraction dedicated to the life and times of Alexander Hamilton himself — is now slated to open on Northerly Island in April. It's a bold move from the show's producer, Jeffrey Seller. Unprecedented, actually, in terms of Broadway. The idea, clearly, is for the touring exhibition (like the show, it's a for-profit endeavor) to work in tandem with the show itself. If you've seen "Hamilton," the thinking goes, you'll want to see the exhibition.

And, especially given all the plans to send Chicago students to the exhibit at either low prices or no price at all, it would make sense that some of those kids then will go home and try to hit the “Hamilton" ticket lottery.

The decision to launch the exhibition in Chicago clearly motivated a desire to shore up demand for the show, rather than simply move it to another city where demand would likely have been off the charts with no ads at all. Seller told me recently that the show and the exhibition would run together, at least for a few months. There was no way, he said, that he was closing the show prior to the raising of the big tent on Northerly Island. He made a firm commitment.

That makes perfect sense: "Hamilton: The Exhibition" is planning a national, if not international tour, roughly following the touring trajectory of the show. It has to start with a bang if it is to attract the attention of other cities. And, let us remind ourselves, it is costing roughly as much as the show itself.

That means "Hamilton" is here at least through the fall of 2019, and, I suspect, most likely through the end of that year. And then that'll be that.

Seller and his partners do not want to see empty seats — nor do they want to have to reduce their ticket prices, especially since that runs the risk of compromising their other companies.

Ergo, advertising. They're hoping that conventioneers in Chicago this fall who did not know the city had its own production of the most dazzlingly successful show of its generation will look out from the windows of their Uber, see an advertisement rolling down the street, and find their way there. I was tempted to write, "find their way to the room where it happens," but all those lines are now sitting on the used-car lot.

Next Article:New trade route brings benefits to China and Europe