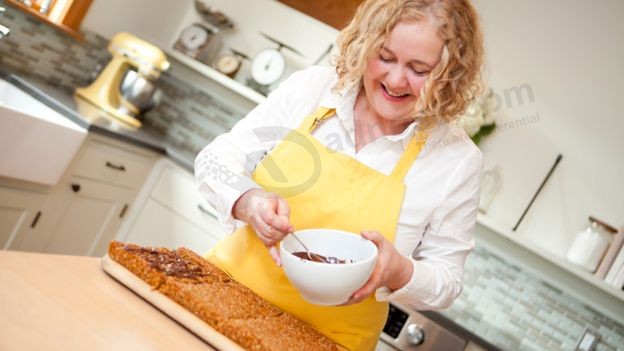 As celebrity-backed reviews go, pudding-maker Tracy Claros got a pretty good one.

A UK expat in Texas who was trying to introduce Americans to the joys of traditional British desserts, in 2008 her sticky toffee pudding was rather enthusiastically reviewed by Oprah Winfrey's magazine, O.

The popular publication gushingly described the mixture of sponge, chopped dates and toffee sauce as "the sexist English creation since [actor] Colin Firth".

Unsurprisingly, Tracy's Sticky Toffee Pudding Company saw a rise in sales via its website, and at its main stockist, upmarket US supermarket chain Whole Foods Market.

Not bad for puddings that Tracy had started selling four years earlier on a foldout table at a farmers' market in Austin, Texas.

Now in her early 50s, Tracy had moved to Texas from England in 2003 for a country and career change.

Today her business has annual revenues of $4m (£3m), and other stockists now include Costco and Wal-Mart.

Before emigrating to the US, Tracy had spent the previous seven years working as a speech therapist in a British hospital.

But wishing to do something else with her life, and a keen baker since she was a child, she decided that she would risk starting a business focused on sticky toffee puddings.

Inspired by the renewed popularity of the dish in the UK at the time, but considering the British market to be saturated, she was hopeful that she could win over Americans.

Able to live and work in the US thanks to gaining the required green card during an earlier period in the States, in 2004 she launched her Sticky Toffee Pudding Company from a basement in Austin.

She would turn up at Texas farmers' markets with sticky toffee puddings based on her mother's recipe, and other homemade British desserts such as lemon pudding and hot chocolate fudge cake.

Immediately she realised that she had a food language barrier to overcome - in the US the word "pudding" has a different meaning than in the UK.

While in the UK a pudding means both anything you have for dessert, or specifically a hot dish that is baked or steamed, in the US it is associated just with cold custards and mousses.

So Tracy had to explain to customer after customer exactly what a sticky toffee pudding was, and the need to warm it before you eat it. Thankfully, she has an evangelical enthusiasm for the pudding.

"It's so delicious, there's something very special, almost magical about them," she says.

"We still get emails all the time from Americans who have tried it for the first time, and say it is the best thing they have ever eaten."
As sales grew at the outdoor markets through positive world of mouth, Tracy then started to approach US retailers with the hope of getting them to stock the sticky toffee puddings and other products.

This brought the next hurdle she had to overcome - most US food stores did not provide refrigerated space for chilled deserts like hers, just freezer sections.

After a lot of persistent persuasion, Tracy was able to get retailers to give her products some space in their chilled aisles.

And with the likes of Whole Foods Market on board, her sticky toffee pudding came to the attention of the team at Oprah Winfrey's magazine. Tracy's desserts also started to win national US awards, giving them further publicity.

With no outside investors, Tracy says she takes pride in running the business as efficiently as possible.

She only recently finally swapped her basement for an office in downtown Austin, and has just one directly employed office worker - her 25-year-old son James who looks after online sales.

Next Article:Is Your Customer Support Killing Your Business?