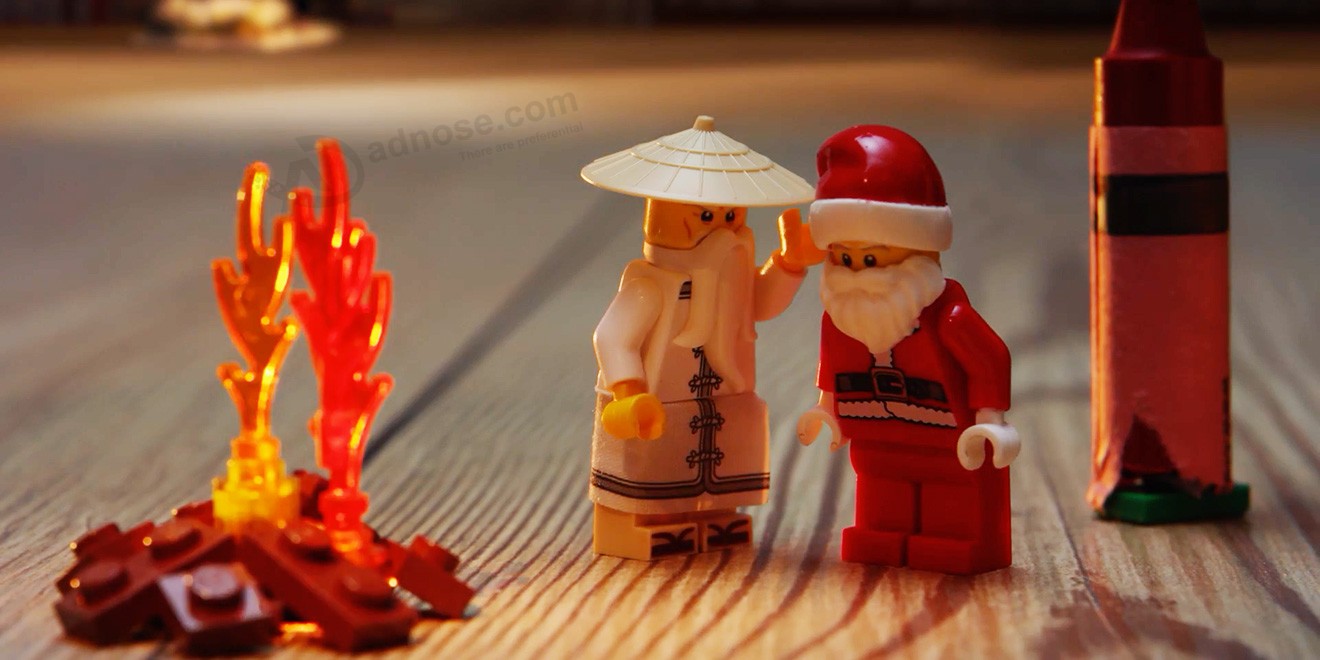 Lego Australia is out with a largely winsome addition to the Christmas advertising pile—a stop-motion animation about a Lego Santa finding his way home to save Christmas, thanks to a little surprise help from a spirited stranger.

Santa grabs onto a string of Lego Christmas lights that’s stuck to the giant impostor’s big toe, in an apparent attempt to save it. Instead, Saint Nick ends up flung off into the wilderness, aka underneath the couch.

There, in those ostensibly East Asian lands, he finds Sensei Wu. Santa tries to tell Wu, a martial-arts-sage archetype, about the mayhem that is surely underway back at the workshop. Elves are running around frantically, literally knocking each other’s heads off. Reindeer are cruising around on conveyor belts. Some blonde character in a blue shirt and purple scarf, presumably a child who’s gotten an empty box, or the wrong gift (seriously, another neck wrap?), is weeping in horror.

Wu shrugs. He has no idea what madman Santa is ranting about, or no ability—and little apparent desire—to help him get back. At least, until Santa has crawled into a sock to sleep. Then, a wheel—the straggling aftermath of the North Pole catastrophe—flies out of the sky and lands at Wu’s feet.

When Santa awakes, he discovers that Wu has begun taking apart his own Lego shelter, and is halfway done turning the parts into some kind of vehicle. Together, they finish it. And with the help of a half-crayon and a little ingenuity, it turns out to be a magic motorcycle, powered by the string of Christmas lights. Then, they drive off to save the day.

“Build together,” reads the onscreen tagline, in bold red and green letters.

All in all, it’s a delightful little story that perfectly illustrates the sort of elaborate world-building that Lego toys foster, and the imaginative play that can happen within those little universes. Sure, the overtones of exoticism might risk coming across as a little off-kilter—Wu’s character at first seems like a foil for Christmas, then becomes an active participant in the Christian ritual by literally sacrificing his home for it, in a sort of uncomfortable conversion parable.

A more generous reading might frame it as a tale of camaraderie and generosity, with the sensei becoming a Good Samaritan … or preferably some non-biblical equivalent thereof—let’s just say a hero. Plus, Christmas these days is all about the consumerism, anyways.

The different cultures featured may intend to reflect the campaign’s target market—a press release describes the ad as part of a broader push that includes the Asia-Pacific region as well as Australia and New Zealand across various media. Japanese families, for example, do celebrate Christmas as a non-religious holiday—often, oddly enough, by eating a lot of KFC. (That ritual is thanks to the fast-food chain’s deliberate effort to commercialize the holiday in the latter half of the 20th century, and presumably aided by the nominal visual similarities between Santa and Colonel Sanders, who is frequently sports a red Christmas hat, in that market.)

Lego, globally, is no stranger to evocative holiday advertising about building and togetherness. Take, for example, the brand’s fantastic 2013 spot (below) about a father-and-son construction team.

The stop-motion ad, for its part, came from a “dream brief,” says director Kyra Bartley. “It took over 100 hours of animation, shot over nine days, and around 12,000 Lego pieces from nine different sets to build, featuring 13 different characters,” she says. “I’m sure everyone has nostalgic memories of building magical Lego worlds as a kid, so doing that inner child’s sense of imagination justice was really a driving force for me.”

In that, Bartley certainly succeeded.

Next Article:WPP Gives In and Agrees to Sell Asatsu-DK to Bain Capital for $1.35 Billion