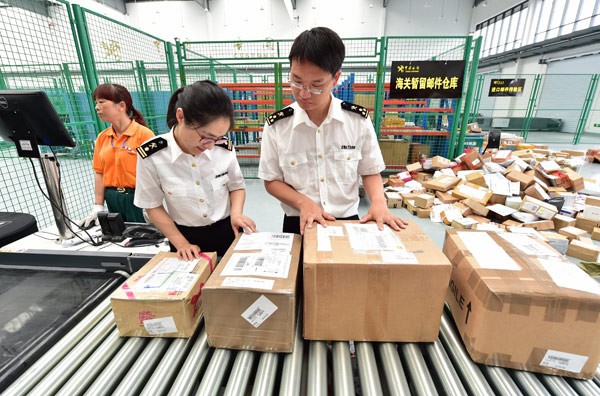 Chinese firms specializing in cross-border e-commerce are an enthused lot these days.

Government measures to facilitate trade have helped them in several ways, including logistics, customs and cross-border payments.

All this will pave the way for rapid development of the sector, they said.

It serves 10 million registered buyers from over 230 countries and regions by connecting them to over 1.4 million Chinese suppliers from 34 areas across China for over 30 million products.

It has established two platforms to help Chinese SMEs go overseas. The first is a trading platform where Chinese enterprises could get overseas orders continuously and close deals.

The second is an integrated platform for international trade where services like online payments, logistics, storage, supply-chain finance, customs clearances and tax refunds will be offered.

"The facilitation of trade can greatly shorten the cycle from the signing (for orders) to the completion of the (goods) delivery, promoting trade growth, the flow of funds and product updates," Wang said.

The Shanghai-based cross-border e-commerce site Ymatou.com is also benefiting from the facilitation of trade and the Belt and Road Initiative.

Zeng Bibo, chief executive officer of Ymatou, said, "Trade barriers among countries will be further reduced while corresponding policies and measures are becoming more convenient, which will also bring about a more stable and positive atmosphere and environment for enterprises' expansion and capital deployment across various countries."

Zeng said the Belt and Road Initiative could speed up a series of processes in cross-border trade, including fund settlement and logistics, as well as promote the construction of infrastructure and ecological environment in related industries.

Ymatou will continue to improve its logistics. "We'll mainly focus on the evaluation and operation of railway channels between China and Europe, and therefore improve the supply-chain efficiency for European large commodities to enter the Chinese consumer market," said Zeng.

Ymatou will further increase its commodity portfolio by developing local goods from East Europe, the Middle East and Central Asia, to introduce them to Chinese online shoppers. It will also select two to three logistics nodes to build overseas ware-houses and logistics transfer centers.

The government will further streamline administration, enhance compliance oversight and improve service as well as the policy matrix for cross-border e-commerce, to boost efficiency and reduce costs of doing business.

Statistics from the Ministry of Commerce show that 220 countries and regions across the world were covered by China's cross-border e-commerce network as of 2016, with a turnover of 5.85 trillion yuan, up by 28.2 percent year-on-year.