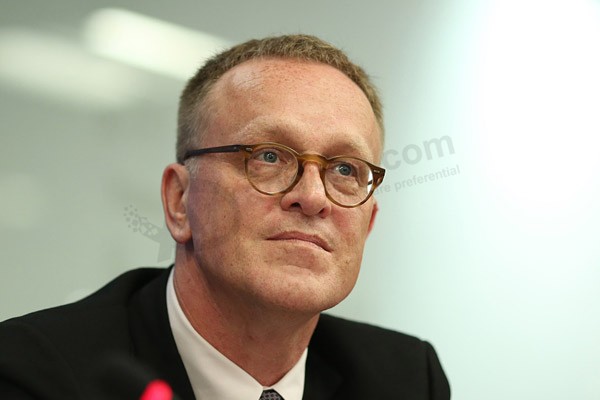 The Communist Party of China will hold its 19th National Congress on Oct 18. In the runup to the meeting, China Daily interviewed Bert Hofman, country director of the World Bank for China, the Republic of Korea and Mongolia, for his views on economic developments here and the country's global leadership role.

What do you feel has been China's biggest achievement during the past five years and what is its most notable change?

I believe China's leadership in the world is the most notable achievement. The country has stepped up to lead on very important issues such as climate change. The Paris Climate Agreement would not have been possible without China.

When President Xi Jinping attended the SDG summit, he gave his support to the UN Sustainable Development Goals.

In international development, China has also been very supportive of the World Bank and our agenda.

It has also set up its own organizations to enhance the capabilities of international financial institutions to provide development finance. Finally, the country's Belt and Road Initiative, which is a major program, can be enormously beneficial.

As a World Bank official, I think the drive to eradicate poverty is the most important development in the past five years.

We are confident China will achieve its goal of eradicating extreme poverty in the countryside by 2020. For the world, our target to eradicate poverty is 2030. It will be great for China to achieve it by 2020, 10 years ahead of our schedule.

What are the three words you would use to describe China today?

It is the three "Cs": confident, competent and caring. China is very confident and I feel rightfully so. It has managed a very difficult economic situation－the global financial crisis. It has also achieved a soft-landing at high growth rates and remained stable.

Competent (is another key word) because it is difficult to manage a combination of monetary and fiscal policies. Structural reforms were implemented during the past decade, which have brought these achievements.

Finally, I would say caring, because poverty reduction goals at home and internationally, inclusive development are significant characteristic of China's economic policies.

What is the biggest challenge China faces and how can the country overcome it?

China's situation is already remarkable. For more than 35 years, it has maintained exceptional growth rates. Maintaining (them will be a) big challenge.

I (also) believe the reforms of the 3rd, 4th and 5th plenums (of the 18th CPC Central Committee) are all going in the right direction. But challenges remain. The most urgent one is deleveraging the economy to ensure that growth becomes less dependent on credit.

Secondly, Jim Yong Kim, president of the World Bank Group, put the emphasis on the three "D" at the 1+6 meetings. This is not only (about) driving innovation and discovering new technologies, this is also about removing distortions, which still remain in the labor, land and capital markets. (By doing that), human and physical capital (will) be more productively used.

Thirdly, at $9,000 per capita, China has a lot of catching up (to do to match) the OECD average of $40,000 per capita. Accelerating the diffusion of technologies and management techniques, which are already there, will remain a very important driver of growth for China. Finding the right policy balance, so all these factors can play a role, will be a challenge.

Could China's experiences and practices be used to solve pressing global problems?

There are many. I think the most important lesson was the decision by Deng Xiaoping to reform and open up at the same time.

The second lesson was that China did not blindly adopt or import (a model) from abroad. It built its own version.

The third lesson has been the emphasis on inclusion. Deng Xiaoping said "some may get rich first", and they did. But there has always been a caring approach to society's poor. They have benefited from the reforms. I believe this is very important for social stability.

Other countries that have put less emphasis on that did go through more phases of instability, which in the end distracted reforms and undermined growth and development.

What will China be like in five years time and what is the country's long-term future?

I believe the first centennial goal will be achieved so that China will be a moderately prosperous society by 2020. In the longer term, I see just opportunities. Every emerging economy in the history of the world has gone through difficult times. There is a need for continuous attention, particularly on the macroeconomic side, to keep growth stable because that will remain the biggest risk. Overall, though, China has the capabilities to maintain relatively high growth for the next 15 or 20 years－that seems feasible.

As a senior official with a major financial institution, which sectors do you think offer the most opportunities for development?

If you look at China now, you see many new drivers of growth. There is the service sector, IT and fintech (or financial technology) and other emerging factors.

In the end, the country has a strong manufacturing base although it is declining in relative importance. Yet it is still the biggest in the world. It also has an emerging middle class.

People are increasingly getting richer and they have money to spend. In my view, sectors which will be successful are those that satisfy and serve the demands of China, and the demands of the emerging middle class.

In the narrow sense, it is, of course, housing, mobility and urbanization. But in the broader sense, it is entertainment, services and conveniences, agriculture and safe food among others. So, any sectors and sub-sectors which can deliver the demands of the rising middle class will be successful.

What opportunities will the Belt and Road Initiative throw up for China and the rest of the world?

We at the World Bank are enthusiastic about the initiative. We are engaging with the government and all of our other members involved in the project to make this a reality.

We see a big opportunity to increase connectivity among the economies along the Belt and Road, (which could) become a key driver of growth for the whole world. It will not be easy to get that done as we are only at the beginning.

At the first Belt and Road Forum, it was like a meeting of minds. We believe that as countries engage, we will see reforms in trade policies, trade facilitation and customs procedures to make it easier to trade across so many countries. We will also see reforms in the investment climate. There is a big opportunity here.

China and other countries would like to invest along the Belt and Road. But the investment climate needs to be good. There are a lot of infrastructure needs, but the policy environment for infrastructure investment needs to be right. A great deal of reforms will also be necessary to make the Belt and Road Initiative a success. Then, of course, there is the infrastructure itself, which will require quite a bit of financing, and that is one of the areas that the World Bank and our colleagues from the private sector arm, the International Financial Corporation, are focusing our efforts on. We are looking at policy, sectoral investment climate, and financing as well.

What are your expectations for the 19th National Congress of the Communist Party of China and what key issues will you be watching for?

I am sure many ideas and policies will be discussed. But I feel it is important for the basic direction of reforms to be reconfirmed (as laid out) in the 3rd, 4th and 5th plenums (of the 18th CPC Central Committee), as well as the goal of eradicating extreme poverty by 2020.

Previous Article:Ryanair backs down over passenger rights for cancellations

Next Article:Siemens to merge rail operations with French rival Alstom