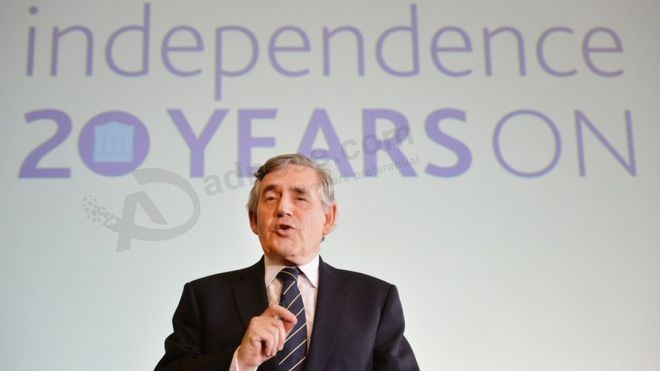 Former prime minister Gordon Brown has warned that the UK and other major economies are not well-equipped for the next financial crisis.

Mr Brown, who was in Number 10 during the banking crash of 2007-8, said they need to guard against "complacency" or "not being aware" of risks.

The next crisis could come from Asia's shadow banking sector, he suggested.

In the UK the government must work more closely with the Bank of England to ensure financial stability, he added.

Mr Brown, who served as chancellor from 1997 to 2007 and prime minister until 2010, was speaking at an event marking 20 years since he made the Bank independent.

At the same event, Prime Minister Theresa May said the Bank had been "strengthened and improved" since the financial crisis.

Mr Brown warned the next financial meltdown could come from Asian banks which are not subject to formal regulatory oversight, known as "shadow banking".

"If that crisis were to emerge, would we really know who owed what to whom and on what terms?" Mr Brown said.

He suggested that the G20 group of the world's biggest economies was not doing enough to track those or other financial risks.

As a result, he said, the "dangers of either complacency or of simply not being aware of what is going on in the world arise".

He added that the co-operation put in place during the financial crisis - which he helped to lead - had been watered down since 2010.

Critics have said the Treasury, under Mr Brown's leadership as chancellor, was too slow to spot the 2007 and 2008 crisis, along with City regulators and the Bank of England.

Some have suggested Mr Brown's decision as chancellor to split financial regulation between those three bodies had contributed to the crisis.

But on Thursday, Mr Brown said the failure came about because they did not work together closely enough.

He warned that a decade later, the Bank was being left "exposed" as the main financial regulator, which would "haunt us if a crisis were to hit Britain".

"There is no way you're going to deal with a crisis unless the Bank and the government are working together," he said.

Mr Brown suggested the Treasury and the Bank should set up a joint group to deal with financial stability.

On Thursday, Mrs May set out the relationship with the Bank, saying it was the government's role to ensure the economy serves "the interests of ordinary working people".

The Conservatives reformed financial regulation after the crisis, putting the Bank at the centre of the system through the Financial Policy Committee.

The Treasury also stays in contact with the Bank through regular meetings, and has a non-voting official on the Bank's interest rate-setting committee.

Next Article:4 ways Trump and his family could benefit under the Republican tax plan