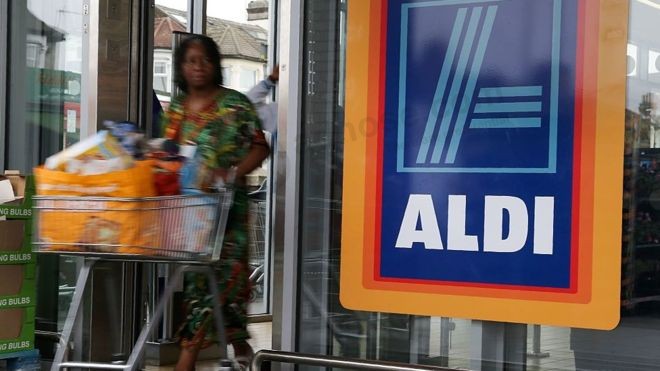 Aldi has reported record sales in the UK and Ireland for last year but its profits have fallen sharply amid a fierce price war among supermarkets.

The chain blamed the fall on its "continued investment in prices and infrastructure".

Aldi boss Matthew Barnes told the BBC it had invested "a huge amount" to keep its prices the lowest in the sector.

"We view that position of having the lowest price in the market as the contract we have with our customers, and whatever happens and whatever challenges arise we maintain that price gap," he added.

Aldi, which currently has 726 stores in the UK, said it planned to open a further 70 this year and would invest a further £459m.

The German chain currently has a 6.9% share of the market, according to the latest industry figures from Kantar Worldpanel.

This figure makes it the fifth-biggest supermarket in the UK after Tesco, Asda, Sainsbury's and Morrisons.

"We have seen discounters' growth slow down over the last four years and we expect that slowdown in growth to continue," said Tom Wharram, analyst at Bernstein.

He said Aldi had been hit by rival Tesco's introduction of a budget range of own-label "farm" brands last year.

"These are features we would more traditionally associate with a supermarket than a discounter and suggests they are expanding growth by moving away from a pure discounter model," he added.

Aldi said that its future investment plans were unaffected by the UK's decision to leave the EU.

It plans to continue its rapid expansion and has said it will have 1,000 stores in the UK by 2022.

"The fact that more and more customers walk through our doors every day of the week gives us the confidence to carry on investing," said Mr Barnes.

While the majority of consumers in the UK still shop at the big four supermarket chains - Tesco, Asda, Sainsbury's and Morrisons - Aldi and its low cost rival Lidl have had a huge influence on the sector.

Yet Aldi continues to sell a fraction of the products its bigger supermarket rivals stock.

The vast majority (94%) of these are private label. Not being beholden to the big brands enables Aldi to buy products more cheaply and pass on that saving to customers.

The most striking number in these Aldi results is the extra £1bn in sales it has added in the space of a year.

This business is still pinching customers from rivals.

Critics say Aldi's growth is predominantly space driven - in other words because it's still relatively small it's got lots of capacity to grow, something the big established players don't have.

But when it opens a new supermarket, the shoppers come. They like the prices.

That's one big reason why profits have taken another knock, as Aldi can't afford to be beaten by its big competitors on price.

It's also pouring money into new stores and infrastructure, to keep up with the demand. No sign of a consumer slowdown here.

Next Article:Oil prices jump over 3% on rising demand and production cuts