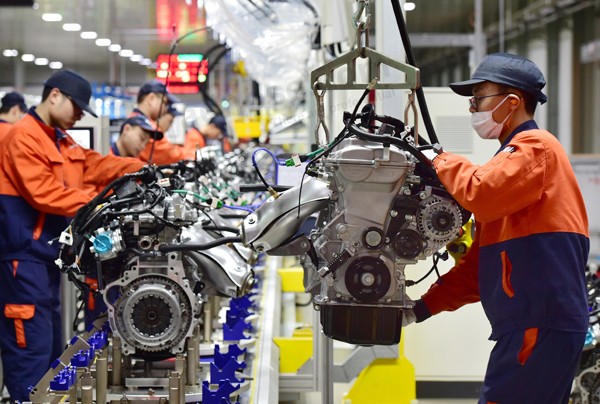 Forecast for economic growth higher due to infrastructure investment

China's economic growth will reach 6.8 percent year-on-year in 2017, although it may moderate next year to 6.6 percent, according to a forecast released on Wednesday by the Organization for Economic Cooperation and Development.

Analysts said the growth of the world's second-largest economy remains on track despite weakening indicators for August.

In a report analyzing the growth prospects of the world economy, the OECD adjusted its forecast of China's GDP growth this year from 6.6 percent in its previous forecast in June to 6.8 percent, citing its brisk public infrastructure investment.

"Strong import demand from China in the early part of 2017 has been a key driver of the higher than anticipated growth in the region," it said.

It added that growth in China is likely to moderate next year, as stimulus measures ease and efforts continue to stabilize corporate debt and rebalance the economy.

As China's economic fundamentals improve, international institutions have generally raised their forecasts of China's growth and expressed more confidence in the country's prospects in recent months, although indicators have pointed to slight weakening of the economy in August.

Official data released last week showed that a host of indicators for August, such as retail sales and fixed-asset investment, missed market expectations.

"The underlying health of China's economy remains relatively firm," said UBS China economists in a research note. The investment bank said China's growth remains "on track" although it may soften from 6.9 percent in the second quarter to 6.7-6.8 percent in the third quarter. China's growth for the whole year could reach 6.8 percent, it said.

Despite the still strong growth prospects, analysts agreed that China needs to tackle challenges such as a piling up of debt, especially corporate and local government debt, and the rebalancing of the economic structure.

The OECD suggested that China's policymakers should "aim to reduce the heavy reliance of economic growth on credit, thus targeting actions toward reducing the risks stemming from the significant accumulation of corporate and local government debt".