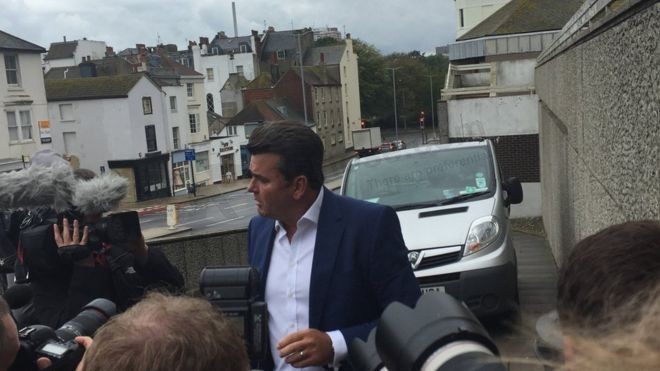 Former BHS owner Dominic Chappell has denied failing to hand over information to the Pensions Regulator during a probe of the retailer's collapse.

The regulator alleges he failed to provide information and documents on three occasions.

Before pleading not guilty he asked for the case to be adjourned because his solicitor was unable to attend.

Mr Chappell said he had not received a summons because he had been out of contact on a boat during August.

The district judge at Brighton Magistrate's Court rejected that argument and gave Mr Chappell some time to read the court documents before he entered his plea.

The trial has been scheduled to start on 8 January 2018.

The former owner of British Homes Stores Dominic Chappell, has pleaded not guilty to three charges in relation to not producing documents demanded by the pensions regulator.

It is in connection with the collapse of the company last year, which left thousands of staff facing the prospect of lower than expected pensions.

Dominic Chappell bought BHS for £1, owned it for just over a year, and during that time received £2.5m in payments from the company.

He arrived at Brighton magistrates court this afternoon to face a criminal charge, of not providing information requested by the Pensions Regulator, which carries an unlimited fine.

The Pensions Regulator has already reached a deal with Sir Phillip Green, who sold BHS to Mr Chappell, to shore up the company's pension scheme with an extra £360m.

But the pension payments will still be lower than expected, and the regulator continues to investigate whether Dominic Chappell should make a contribution as well.

He has always denied responsibility.

The subsequent collapse of the department store chain led to the loss of 11,000 jobs and crystalised a deficit of £571m in the firm's pension scheme.

Outside the court he was asked by the BBC's Simon Gompertz: "Are you going to come up with some cash for BHS pensioners Mr Chappell?"

He responded: "I have no comment to make at this time, but when I come out, maybe I'll have a comment."

Mr Chappell's lawyer could not attend on Wednesday so the former bankrupt had to represent himself.

Mr Chappell explained his request for an adjournment by saying he said he had been unable to look at the summons sent to him from the Pensions Regulator.

He said he first learned of his summons during a phone call from the Pensions Regulator on 21 August.

Mr Chappell said: "My lawyer was on the phone call - they subsequently sent a copy of the summons which arrived some days later.

When district judge William Ashworth asked him why, he replied: "Because I was away, I did not have internet access when I was away."

"I was offshore, on a boat," he explained.

Mr Chappell said a copy of the summons had not arrived at his remote country home.

He told the court he was going to meet his lawyer on Tuesday but his representative was now "out of the country dealing with family circumstances."