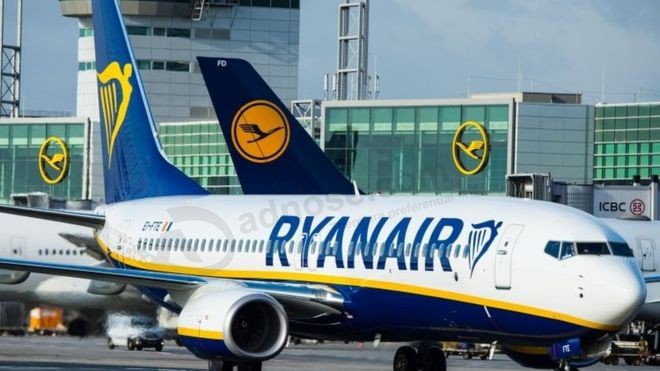 Ryanair cancelled 82 flights on Sunday after admitting it had "messed up" the planning of its pilots' holidays.

The budget airline said on Saturday that it would cancel 40-50 flights every day for the next six weeks.

Marketing officer Kenny Jacobs said affected customers with bookings up to 20 September had been informed.

"We have messed up in the planning of pilot holidays and we're working hard to fix that," he said.

Most of the cancellations are due to a backlog of staff leave which has seen large numbers of the airline's staff book holidays towards the end of the year.

The airline is changing its holiday year, which currently runs from April to March, to run from January to December instead.

Rynanair said the shift meant it had to allocate annual leave to pilots in September and October.

The cancellations could affect up to 285,000 passengers, who will be offered alternative flights or refunds.

Mr Jacobs said affected customers would have been sent an email.

"We advise customers to check the email address used to make their booking," he added.

A page on the Ryanair website details flights cancelled up until 20 September. It says 56 flights are cancelled on Monday, 55 on Tuesday, and 53 on Wednesday.

Ryanair has said that less than 2% of its flights would be cancelled and the move would help it hit its annual punctuality target of 90%.

But passengers have complained about the resulting uncertainty.

Gary Cummings was due to fly from Leeds to Bratislava on Friday morning.

On Thursday night he received a text message from Ryanair, saying his flight had been cancelled.

The only alternative flight he was offered was on Monday - when he was originally due to be returning to Leeds.

"We were left in limbo really," he told BBC Radio 5 live.

UK Aviation Minister Lord Callanan said he expected "all airlines to fulfil their obligations to their customers".

"In the event of any disruption or cancellation airlines must ensure customers are fully compensated and every effort is made to provide alternative travel arrangements."

Customers do have rights under the European Passenger Rights legislation.

"The rules say if the airline doesn't have a suitable alternative flight, you have to be booked on a rival airline," said Simon Calder, travel editor of the Independent.

He said passengers should also be able to claim compensation for the cancellations.

"It's a really odd thing in terms of customer care, to say we want to improve the operation by keeping more planes on the ground," he told the BBC.

Next Article:PwC reveals black and Asian workers are paid 13% less