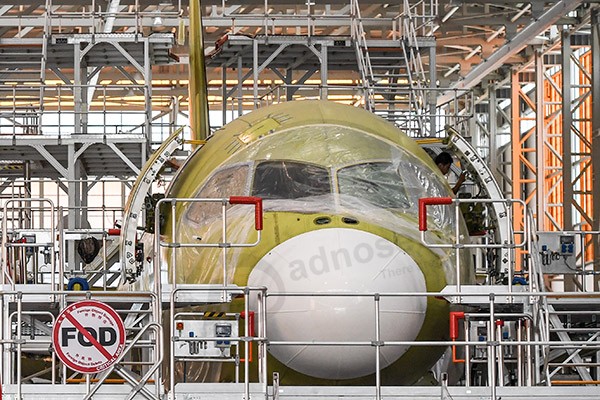 Wang, vice-president of Shaanxi Ligeance Mineral Resources, and a board member of Gardner Aerospace, said the new project in Chengdu costs an investment of 600 million yuan ($91.2 million).

"The industrial park will strengthen its innovation capability by introducing advanced technologies and capital from abroad. Together with the management team of Gardner, we plan to further consolidate the global aerospace industry supply chain.

"The project will help to advance the domestic manufacturing level of high-temperature alloy materials and core components for aircraft engines, and push forward the localization of aircraft components. We are also likely to take some orders of the C919," he said.

Founded in the 1950s, Gardner Aerospace has been a leading aerospace-components manufacturer in Europe, and it mainly produces the surface of the leading edge of wings. Ligeance Investments said the acquisition will allow it to improve services for customers in China and other parts of the world.

Wang said he has further plans to purchase other foreign companies.

The aviation sector has become an indispensable part of high-end manufacturing in Chengdu. By 2022, the industry scale of aviation in the city is expected to reach 120 billion yuan, and will form an industry cluster of aircraft manufacturing.

Lin Zhijie, an aviation industry analyst and columnist at Carnoc.com, one of China's largest civil aviation web portals, said the successful maiden flight of the C919 proved China's capability in designing and assembling narrow-body commercial aircraft that is in line with international standards.

"A lot of Chinese aviation manufacturing companies don't have enough capital and financial strength for the research and development of high-end manufacturing, especially making those complicated aircraft components. They need external support to grow faster and produce more competitive products."

Previous Article:Obamacare at risk of failing in Virginia