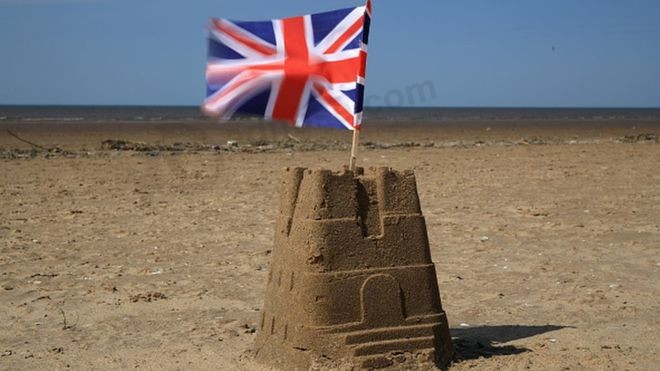 Brexit brings risks of food shortages if the UK does not manage to get its customs processes sorted out, the British Retail Consortium has warned.

However, Brexit campaigners said technology meant there would be "no need for hold-ups at borders".

A UK government spokesman said the UK's future relationship with the EU would work in the interests of everyone.

More than three-quarters of food imported by the UK comes from European Union countries.

All imports will be covered by new customs arrangements after the UK leaves the EU.

In a report setting out its goals for future customs arrangements, the BRC said delays, disruption or additional costs would "affect availability on the shelves, increase waste and push prices up".

The BRC warned that a "no deal" scenario, with the UK leaving the EU without an agreement on a future trading relationship, or without a transitional period to implement the new system, could result in major delays in getting perishable products such as food across borders.

A "no deal" situation could result in delays of up to three days at ports, it said.

But a spokesman for the Department for Exiting the European Union (Dexeu) said:

"The Prime Minister has made clear that we will be seeking a deep and special partnership with the EU, that works in the interests of businesses and consumers in both the UK and the EU.

"We have published a paper that lays out the government's aspirations for the UK's future customs arrangements and also makes clear that we want an implementation period, that avoids a cliff-edge for business and allows a smooth and orderly exit from the EU."

"Modern computerised customs procedures are something the EU must by international law put in place for the UK as a sovereign state with its own customs authority post-Brexit," he said.

"It is also necessary for the UK government to make sure that HMRC has installed all the necessary computer and other systems to handle trade with the EU as a foreign customs authority.

"There is no need for any hold-ups at borders provided both the EU and HMRC take these necessary actions, which they should be preparing already," he said.

And Jamie Whyte, director of research at the free trade think tank, the Institute of Economic Affairs, said: "If the UK leaves the customs union, barriers to the entry of imports are entirely a matter of domestic policy."

"This gives the government a huge opportunity to make importing as easy as possible, not only from the EU, but from the rest of the world.

"UK consumers will benefit enormously from the lower prices which would ensue," he added.

Deal or no deal?

But the BRC said that leaving the EU on World Trade Organization terms, without a deal with Brussels, would lead to 180,000 extra firms being drawn into customs declarations for the first time.

As well as a customs agreement, the BRC highlighted the need for deals with Brussels on health and veterinary checks, security, VAT and haulage.

"Whilst the government has acknowledged the need to avoid a cliff-edge after Brexit day, a customs union in itself won't solve the problem of delays at ports.

"So to ensure supply chains are not disrupted and goods continue to reach the shelves, agreements on security, transit, haulage, drivers, VAT and other checks will be required to get systems ready for March 2019," he added.

The BRC report highlighted the importance of cross-border trade with the Republic of Ireland, saying it should be a priority to ensure that the new land frontier with the EU does not make it easier to dump goods on the market, or make it more difficult to track food through all stages of its production.

Next Article:US stocks tick up as missile fear eases