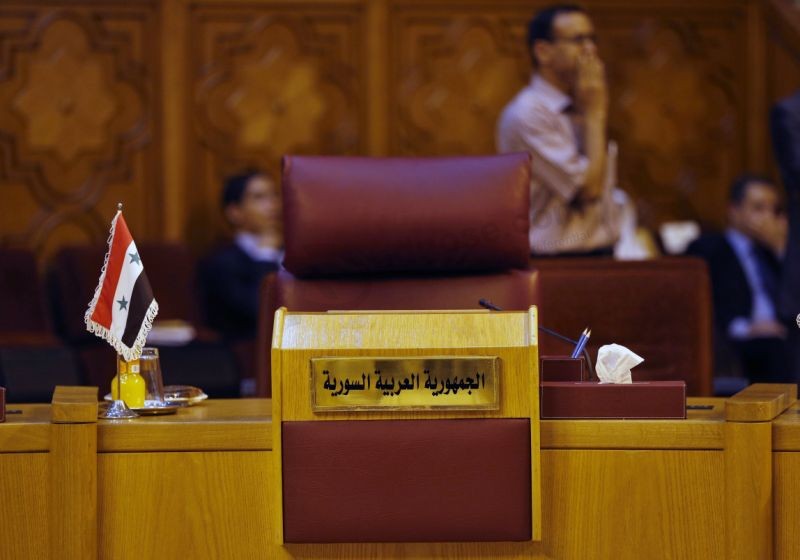 FILE - In this Sept. 1, 2013, file photo, the chair of the Republican Arab Syria, as written in Arabic, is empty during the Arab countries foreign ministers summit, at the Arab League headquarters in Cairo, Egypt. Syria said the United Arab Emirates will reopen its embassy in Damascus on Thursday, Dec. 27, 2018, for the first time in seven years, a reflection of improved relations between President Bashar Assad and some of his Arab foes as the war winds down. (AP Photo/Khalil Hamra, File)

BEIRUT (AP) — The United Arab Emirates reopened its embassy in Syria's capital on Thursday for the first time in seven years, a reflection of improved relations between President Bashar Assad and some of his Arab foes as the war winds down.

On Thursday afternoon, UAE's charge d'affaires Abdul-Hakim Naimi visited the embassy and witnessed his country's flag being raised again on the compound in central Damascus.

The move provides a major boost to Assad, whose forces have won a series of military victories in recent years with the help of Russia and Iran. Sudan's President Omar Bashir visited Damascus earlier this month, becoming the first Arab head of state to visit Syria since the start of the war.

UAE's Foreign Ministry said in a statement that "the step confirms that the UAE government is keen to restore relations between the two brotherly countries back to normal." It added that the move is "to activate the Arab role in supporting Syria's independence, sovereignty, unity and safety and prevent the dangers of regional intervention in Syria's Arab affairs."

"The opening of our embassy is a first step for the return of other Arab embassies," Naimi told reporters outside the compound.

The United Arab Emirates was a supporter of the Syrian opposition, which is now largely confined to the northern Idlib province after losing its strongholds elsewhere. Some opposition fighters have joined Turkey for an expected assault on Kurdish forces in northeastern Syria. The UAE and other Gulf Arab supporters of the Syrian opposition view Turkey with suspicion because of its embrace of regional Islamists.

In October, Assad told a little-known Kuwaiti newspaper that Syria had reached a "major understanding" with Arab states after years of hostility. He did not name the Arab countries in the interview, which was his first with a Gulf paper since the war erupted, but said Arab and Western delegations had begun visiting Syria to prepare for the reopening of diplomatic and other missions.

The interview came on the heels of a surprisingly warm meeting between the Syrian foreign minister and his Bahraini counterpart on the sidelines of the U.N. General Assembly in September. The meeting turned heads because it featured hugs between the two ministers.

The encounter raised questions about whether the Gulf countries, most of them sworn enemies of Assad ally Iran, are reconsidering their relations with Syria.

Anwar Gargash, who is No. 2 at UAE's Foreign Ministry, tweeted that an Arab role in Syria is necessary now to face Iran and Turkey's intervention. He added that UAE through its presence in Damascus is trying to activate the Arab role in what would "contribute to ending war and strengthening opportunities for peace and stability for the Syrian people."

The UAE recalled its ambassador from Syria in 2011 after the start of the popular uprising against Assad. The Syrian Embassy in the UAE remained open. There are also direct flights on Syria's national carrier to Dubai and between the port city of Latakia and the emirate of Sharjah.

Oman, with its policy of quiet diplomacy, is the only Gulf Arab country to have kept its embassy in Damascus open throughout the civil war. In March, Syrian Foreign Minister Walid al-Moallem visited Oman on a rare trip by a Syrian official to the Arabian Peninsula.

Syria was expelled from the 22-member Arab League in 2011. Arab countries have sanctioned Damascus and condemned its use of military force against the opposition.

Next Article:Agency: Government workers could do painting or carpentry work to help pay rent during shutdown