Donald Trump, Walled Off From Reality

What will it take for Republicans in Congress to conclude that President Donald Trump has outlived his political usefulness to them, and is dangerously unglued? We may soon find out.

In one ring of the circus, Trump abruptly decided to pull all U.S. forces out of Syria. This prompted the resignation of both Defense Secretary Jim Mattis and anti-ISIS coalition envoy Brett McGurk.

These guys, unlike many other former Trump appointees, didn’t get fired by tweet. They quit in principled protest, something all too rare in American public life. McGurk sent an email to his staff, declaring: “The recent decision by the president came as a shock and was a complete reversal of policy that was articulated to us. It left our coalition partners confused and our fighting partners bewildered.”

Trump’s reversal also prompted much sharper criticism than usual from his slavish Senate allies. Lindsey Graham, ordinarily a Trump toady, told Vice President Mike Pence: “If Obama had done this, all of us would be going nuts because it’s such a bad idea. The job of the Congress is to hold the executive branch accountable. He’s the commander in chief, but he needs to be held accountable for his decisions. And I want hearings as soon as possible.”

Sen. Marco Rubio of Florida called Trump’s pullout “a major mistake,” and Ben Sasse of Nebraska declared that America’s generals believe that “the high-fiving winners today are Iran, ISIS and Hezbollah.” Even Senate Majority Leader Mitch McConnell was appalled and said so. The usually docile McConnell issued a lengthy statement breaking with Trump:

It’s essential that the United States maintain and strengthen the post-World War II alliances that have been carefully built by leaders in both parties. We must also maintain a clear-eyed understanding of our friends and foes, and recognize that nations like Russia are among the latter.”

So I was sorry to learn that Secretary Mattis, who shares those clear principles, will soon depart the administration. But I am particularly distressed that he is resigning due to sharp differences with the president on these and other key aspects of America’s global leadership.

Meanwhile, in another ring of the circus, Trump shut down the government over Christmas. This undercut Republican leadership, which had a deal with Democrats for a temporary resolution to keep the government funded until the New Year.

But Trump, goaded by commentators on Fox News, reversed course over funding for his promised “big. beautiful wall.” In his deluded state, Trump still thinks the idea of a border wall to be built at a cost of tens of billions of taxpayer dollars along our southern border is hugely popular. In fact, it’s only popular with his hard-core base and far-right pundits. 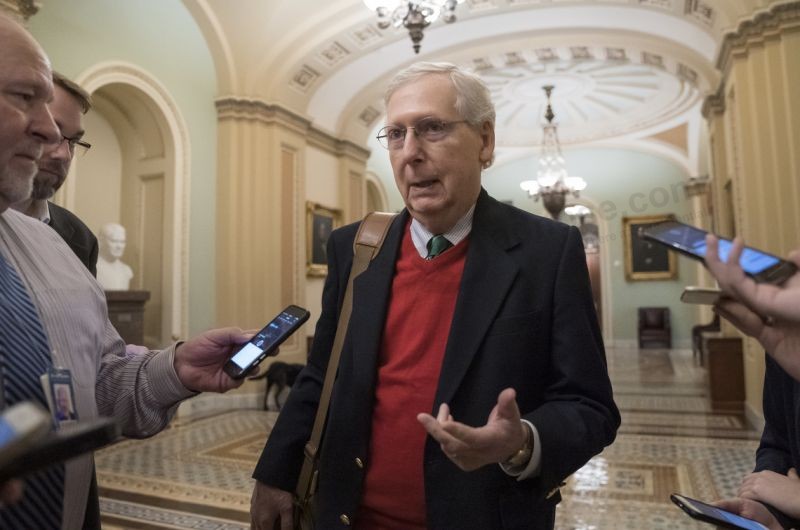 Trump seems to have an edifice complex about the wall. It’s become a vanity project, like Trump Tower, or Mar-a-Lago, or the aborted Putin Penthouse in Moscow.

He insists that a big wall is the best way to keep people out. In fact, most undocumented immigrants in the U.S. do not sneak across America’s southern border. They overstay student, tourist or work visas.

With the new Congress, Democrats in the House simply will not agree to fund Trump’s proposed erection. And public opinion is with them.

You might think ― between the Syria withdrawal, the shutdown mess, and the fact that Trump has now managed to fire or drive out virtually all of his adult minders ― that Republicans have had enough. But that remains to be seen.

House Republicans, humiliated as they were by Trump’s abrupt reversal, dutifully assembled to pass a budget resolution on Friday that included funding for Trump’s wall. To no one’s surprise, the measure died in the Senate.

Trump seems happiest when there are no adults in the room to contain his impulses. As he put it in an interview with The Washington Post, “I have a gut, and my gut tells me more sometimes than anybody else’s brain can ever tell me.”

But often, his gut is dead wrong. Trump has now increasingly become a rogue president, as retired 4-star Gen. Barry McCaffrey told The Washington Post. The more that the Mueller investigation’s waters rise around him, the more reckless he becomes.

So where, finally, are the Republicans? Are they starting to connect the dots between Trump’s disastrous, impulsive foreign policy moves, his budgetary antics and his unhinged personality? Are they, perhaps, worried for their country?

Republicans in Congress may conclude they need to reign in Trump, based on one of three considerations. First, his policies are doing serious damage to the national interest. Second, he is a madman. Third, he is humiliating them politically and has become a partisan liability.

Alas, the first two considerations have been all too evident since before Trump took office. But in his first two years, Trump was too convenient an ally for Republicans to have acted.

Now that Trump has cost Republicans the House and promises further political embarrassment, let’s hope that sheer expedience gets their attention where principled concern for the republic failed.