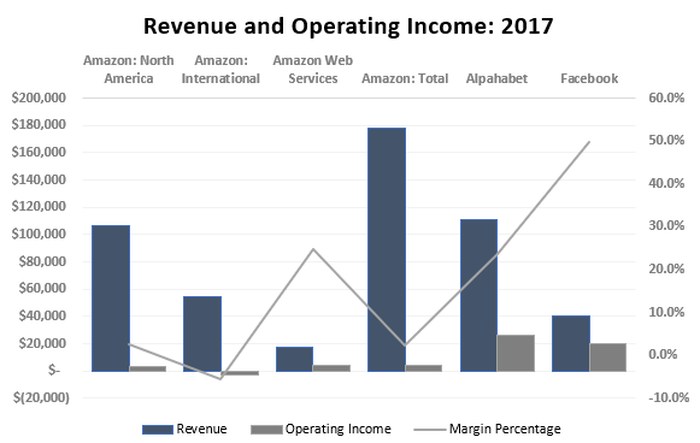 Four years ago, after enduring its second full-year earnings-per-share loss in the last three years despite 20% top-line growth, Amazon (NASDAQ:AMZN) bears questioned whether the e-commerce company could become a reliably profitable entity. Amazon underperformed the S&P 500 by 36 percentage points that year, falling 22% versus the 14% total return from the greater market.

Undeterred, CEO Jeff Bezos had other plans to grow the company's bottom line -- and those plans didn't involve e-commerce. In his 2014 shareholder letter, Bezos wrote that "Amazon Web Services (AWS) is growing big and fast," later adding: "Finally, I'm optimistic that AWS will have strong returns on capital." AWS has since provided the bulk of profits.

Now Amazon has another embryonic business, and it could be the next AWS for investors.

In what's become the worst-kept secret in the advertising industry, Amazon is aggressively building out its digital advertising business to better compete with Alphabet (NASDAQ:GOOGL) (NASDAQ:GOOG) and Facebook (NASDAQ:FB).

Although it's folly to expect Amazon to immediately threaten the Alphabet-Facebook duopoly on a market-share basis, even small market-share gains will disproportionally reward investors. The chart below compares Amazon's operating income by division to Alphabet's and Facebook's in 2017:

Alphabet's margin is understated because the company reported an operating loss of $3.4 billion from its non-advertising-based Other Bets division. Removing that division and other nondirect items would give Alphabet's digital-ad-based Google division an operating margin of 30%. If Amazon's advertising division simply matched Alphabet's 30%, every $1 million in ad revenue would produce more profit than $11 million in North American retailing revenue.

Amazon is growing fast in a fast-growing industry

Unlike AWS, Bezos hasn't discussed marketing significantly in a shareholder letter. However, investors noticed the company added another division in its quarterly report: "other." While this includes other revenue, the company notes it is "primarily" attributable to marketing.

Over the last two quarters Amazon has reported revenue growth attributable to this division of approximately 130%. The point is: Amazon is succeeding in this space and acquiring market share.

Next Article:Why It’s Not Too Late for Back-to-School Advertising