Trade War: What Is It Good For? 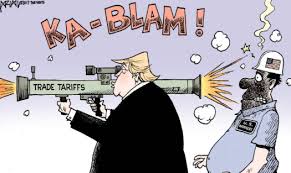 For this episode of Motley Fool Answers, Robert Brokamp and Alison Southwick wanted to consider one of the biggest macroeconomic dangers facing Americans today: the full-blown trade war President Trump seems determined to heat up with China. To help, they brought in an outside expert: Scott Kennedy, the director of the Project on Chinese Business and Political Economy for the Center for Strategic and International Studies -- a nonpartisan, foreign-policy think tank.

In this segment, Scott discusses the various parts to Trump's protectionist plans, China's likely response, why foreign governments are quietly applauding, and what we could be doing beyond directly targeting our No. 1 trade partner.

I don't know about you, but I always pay attention when one of the best growth investors in the world gives me a stock tip. Motley Fool co-founder David Gardner and his brother, Motley Fool CEO Tom Gardner, just revealed two brand new stock recommendations. Together, they've tripled the stock market's return over the last 13 years.* And while timing isn't everything, the history of Tom and David's stock picks shows that it pays to get in early on their ideas.

Click here to be among the first people to hear about David and Tom's newest stock recommendations.

Alison Southwick: What are some other options outside of a potential trade war? I imagine this could lead to a 14-hour discussion, so in the simplest terms possible, are there other options available? What can we do, here?

Scott Kennedy: I think it's important for everyone to know that there are multiple elements to what the Trump administration is planning. This trade action that the president has started is based on an investigation into China's misappropriation of intellectual property, the so-called "Section 301 investigation," which refers to a 1974 trade law the U.S. passed. That investigation found that China was unfairly acquiring technology through coercion of foreign investors in China. Not letting foreign companies gain the proper fees for licensing. Through cybertheft. Through unfair investments in the United States that were state-backed.

The first of the penalties the president has put forward that he's in the process of potentially implementing [that everyone is talking about], are the tariffs on $50 billion or $100 billion of Chinese goods. Who knows? The number keeps evolving, but it's a lot. $50 billion is a lot for me. I don't know about for you guys, here, but that's usually above what we get at CSIS on an annual basis.

But the other parts are equally of concern, and they should be to listeners. The second part is potentially banning or deeply restricting Chinese investment in the United States. In 2016, when it was at its peak, it was $46 billion that year in the United States. Last year it dropped a lot because of China's own financial challenges and a little bit because of American blocking. That's a lot of money, and the U.S. might deeply restrict that investment and basically say that the Chinese can only invest in the United States where the U.S. can invest in China. The president's favorite word -- "reciprocity."

That would have a big effect on specific companies in the U.S. and China and everyone that does business with them, and that could end up actually being bigger than the trade tariff. In addition to that, the president's also talked about restricting visas for Chinese that are in STEM [graduate students, undergraduates, and workers], and visa restrictions would also have a huge effect on companies here and in China.

Besides whacking China in these different ways, there's other things that we definitely can do. First, we can get the rules better. The WTO's rules are pretty good but they're not great. We should upgrade those, and the U.S. has been in conversations over the last decade plus to try and make those rules better, first with all the other WTO members. There was something called the Doha Round that was started in 2001, but basically collapsed in 2008.

We have been in conversation with the WTO about rules related to trade facilitation and harmonization just to make trade easier. To get a lot of the bureaucracy and red tape out of the way. An agreement on trade and services. We have talked with regional actors about agreements with Europe over a free trade deal. We started negotiation in the Bush administration and carried forward in the Obama administration on an Asia-Pacific agreement called the Trans-Pacific Partnership [TPP], which the U.S. finished negotiating in 2015. Both candidates for the presidency in 2016 [Trump and Clinton] opposed TPP when they were campaigning, and President Trump withdrew soon after coming into office.

Those types of agreements would level the playing field, upgrade the quality of the rules of the game [not just in trade, but investment in how state-owned enterprises are operating e-commerce]. Many different places. I think in addition to potentially needing to push hard on China unilaterally, [we need to] improve the rules of the game and then the last part of this is to take care of things at home.

The American infrastructure needs a big upgrade. Anyone who lives in the Washington, D.C. area and has been on the subway knows that.

Kennedy: Yes. Or the drive in today. Your tires will tell you. Healthcare. We're not finished in any stretch of the imagination in making healthcare more widely affordable. Making it portable. Making it more accessible to everybody. Investing in education. Not just for universities but K-12 for apprenticeship programs and things like Germany has that provides opportunities for those folks who want to go beyond high school but perhaps college isn't the right avenue for them.

There's so many different things that we could do at home to make our economy stronger and more productive, and not just to compete with China. Even if China didn't exist, we need to do those things. Those are the three areas I focus on.

Robert Brokamp: To what degree is the rest of the world worried about China? Are there other countries that are just as concerned about what China is doing?

Kennedy: Sure. On the trade and commercial front, this is a universal concern. China's neighbors -- Europe, Latin America, Africa -- everybody has concerns about China. China's often their No. 1 trading partner [often a big source or target for investment], and everyone has the same stories, of course. Technology transfer. Or Chinese companies coming in and taking your resources and not caring too much about your workers. Or other types of bullying and unfair practices.

But, at the same time, their level of willingness to directly confront China isn't the same as the Trump administration's, because China's got a lot of leverage. When China is your No. 1 trading partner and the fastest part of growth for many of your companies, even if it's an unfair slice of the cake, it's still a big slice of the cake. So, folks don't really want to confront China head-on like this. What they'd prefer is to use WTO consistent-like measures to ask the Chinese more politely to change what they do.

In some ways, what the U.S. is doing is representing the globe [by] taking one for the team if they do it right. Of course, the U.S. could cut a side deal which just benefits the American economy but, really, they're standing up for global institutions. Now, it's ironic to say that President Trump, who has criticized the WTO and multilateral system is standing up for the rest of the world and this multilateral system; but, nevertheless, it could have that constructive benefit.