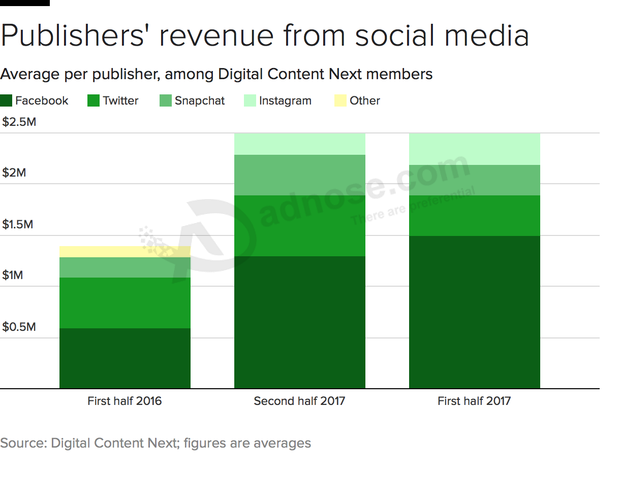 Publishing on social media platforms may not actually be all that lucrative for media companies.

Only 5 percent of publishers' total average digital revenue was generated by Facebook (FB) and Google (GOOG), according to a report from industry trade organization Digital Content Next (DCN). That's a paltry number, considering the two giants' dominance in search and social media sharing.

"The revenue earned from distributed platforms does not yet match the investment and tremendous value of DCN members' news and entertainment," said Jason Kint, CEO of DCN, whose members include NBC Universal (CMCSA), the Associated Press, tronc (TRNC), The Washington Post, The Guardian and CBS Interactive (CBS). "The report once again supports our members' drive for better economics, which is now happening in parallel to a much larger global debate about the societal and economic harm from certain platforms."

The continued dominance of Google and Facebook in the digital ad market and the growth of low-cost "programmatic ads" are squeezing some of the once-hottest names in the world of internet media, which set their ad rates based on their site's traffic.

In recent years, traditional publishers have pursued strategies to cast their content far and wide on social media, as Facebook, Instagram, Twitter (TWTR), SnapChat (SNAP) and others became synonymous with distribution. But how much using those platforms to push content has translated into profits for the providers has been difficult to gauge.

Providers are also adapting to a changing social media landscape, such as Facebook's recent announcement that it would change the way content is shared in its News Feed following the backlash over fake news shared on the platform during the U.S. presidential election.

According to eMarketer, Google and Facebook are expected to account for about 65 percent of all U.S. digital ad spending this year, up from the 58 percent they took in 2016. Ad revenue at Google, corporate parent Alphabet's biggest business, was expected to hit $35 billion, an increase of 18.9 percent on a year-over-year basis.

eMarketer estimates Facebook's total digital revenue to have jumped 40.4 percent to $17.4 billion, fueled by surging demand for Instagram. But after the latest change to the News Feed, internet publishers might have to find new avenues for their own revenue growth.

Next Article:Six Tips For An Effective Facebook Advertising Campaign