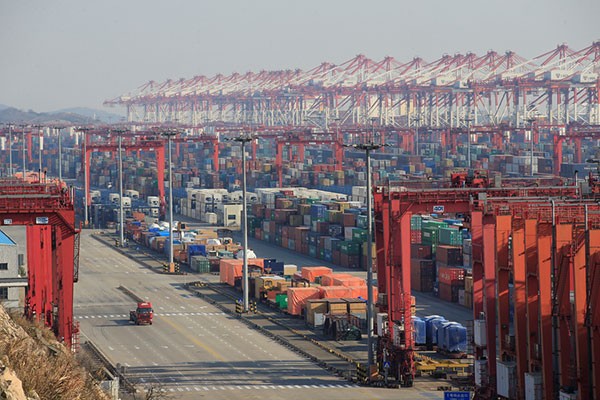 China registered robust growth in imports and exports of goods in January, while its trade surplus with the United States shrank amid rising China-US trade tensions, the General Administration of Customs said on Thursday.

The country's imports surged by 30.2 percent year-on-year to 1.19 trillion yuan ($188.34 billion) in January, while exports increased by 6 percent to 1.32 trillion yuan, according to the GAC.

"While we expect the favorable external setting to continue to support China's exports, rising US-China trade friction remains a key risk," he said. "We expect the US administration to scale up on measures impeding imports, especially from China, as well as targeting the country in other ways."

As US President Donald Trump's administration has slapped tariffs on solar panels and washing machines from China, and some other countries such as South Korea and Mexico, the nation has initiated an anti-dumping probe on imports of sorghum, which is a type of grain processed into feed, from the US last week.

"We oppose the US unilateralism and protectionist approach and hope the country can deal with it prudently," Gao said at a news conference.

"We will carry out trade remedy practice strictly in accordance with the WTO rules and China's relevant laws," he said. "We also hope that the WTO members concerned will abide by international rules and properly resolve their economic and trade differences through dialogue and cooperation."

Previous Article:Where Did All the Advertising Jobs Go?

Next Article:Why Businesses Will Struggle to Adapt to 2018’s Social Marketing Challenges