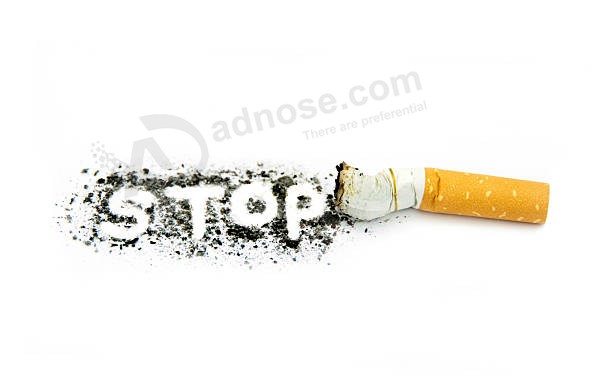 It is part of the company's drive to achieve a "smoke-free future".

The owner of the Marlboro brand has also written to Prime Minister Theresa May asking to be allowed to print information about quitting and switching on its cigarette packs.

However, anti-smoking campaigners described the campaign as a "PR stunt".

The text of the advertisement runs: "Our New Year's Resolution: we're trying to give up cigarettes".

It goes on to encourage smokers to go to a new website containing information about giving up smoking or moving on to alternatives to tobacco.

It also says Philip Morris will:

The advert says the company has spent £2.5bn on develop smoke-free alternatives.

Asked why, if Philip Morris was so keen to go smoke-free, it did not simply stop making cigarettes and switch over to alternative production, a company spokesman told the BBC: "We are trying to go smoke free as fast as we can. If we just stopped selling cigarettes tomorrow, others would sell them in our place.

"In the UK, smokers are well aware of the dangers of smoking but what they want is more information about their options to quit smoking or switch."

In the UK, Philip Morris markets several alternatives to cigarettes, including, including a heated tobacco product, Iqos.

It also owns the Nicocig, Vivid and Mesh e-cigarette brands.

"We believe we have an important role to play in helping the UK become smoke-free," said Peter Nixon, managing director of Philip Morris in the UK.

"The commitments announced today are practical steps that could accelerate that goal. We recognise that never starting to smoke - or quitting altogether - are always the best option.

"But for those who continue to smoke, there are more alternatives than ever available in the UK."

However, Deborah Arnott, chief executive of health charity Action on Smoking and Health said the "offer to support" local authorities was nothing more than a donation, which is not allowed under World Health Organization guidelines.

"As Philip Morris well knows the government isn't allowed to accept 'donations' from the tobacco industry," she said.

"However, it does show that the industry has money to burn. Rather than making donations, it should be forced to pay the government more of its enormous profits."

In July last year, the government set out a plan to make England, in effect, smoke-free in the next few decades.

The new Tobacco Control Plan aimed to cut smoking rates from 15.5% to 12% of the population by 2022, paving the way to a smoke-free generation.

In his letter to the Prime Minister, Mr Nixon said: "We strongly support the government's clear ambition to create a smoke-free generation."

The Tobacco Control Plan "was a major step forward in recognising the vital role that e-cigarettes and other alternatives to cigarettes can play in achieving that goal", he added.