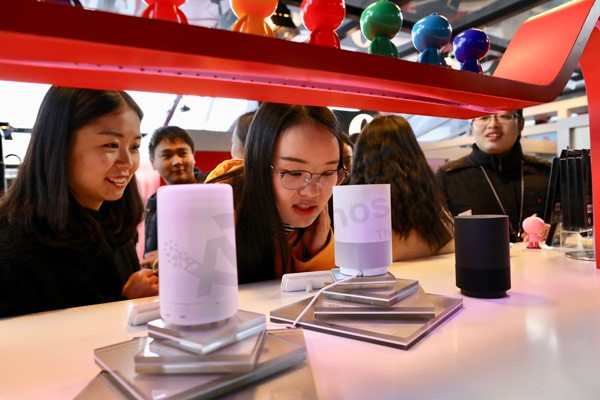 China is expected to provide new impetus for the development of internet technologies across the world, according to industry experts and entrepreneurs who participated in the 4th World Internet Conference in Wuzhen, Zhejiang province.

"China presents possibility of what we can do in our countries for eliminating the digital divide and how internet technologies can help us to gain an edge," said Thomas Kwesi Quartey, vice-chairman of the African Union, in his speech at the closing ceremony of the 4th World Internet Conference on Tuesday.

The conference this year was focused on digital economy development for openness and shared benefits and the building of a community with a common future in cyberspace.

"China's role in the digital economy is no longer a question, I am quite impressed by the country's openness, a role that will increasingly shape the century," said Fadi Chehade, co-chair of the advisory committee to the World Internet Conference.

Silvio Micali, a Turing Award laureate, believes that laws and courts have an integral role in cybersecurity.

"China has grown from being a beneficiary of internet development to being a contributor and leader in certain internet technologies," said Ren Xianliang, deputy director of the Cyberspace Administration of China.

"Internet development should be more balanced, there are already sufficient technologies in some areas, but we can achieve more in others including education and healthcare," Micali said.

"China has achieved a lot in information and communications technologies in the past year. Some scientists have achieved major breakthroughs in quantum computer development," said Wu Hequan, an academician with the Chinese Academy of Engineering.

He said although China is developed in areas such as e-commerce, the country still lags in the use of internet technologies in sectors like healthcare.

More than 1,500 scholars, entrepreneurs, and officials from around 80 countries and regions attended the conference, according to the Cyberspace Administration of China.

"The conference has become the window for peering into the future of Internet development and the world's most cutting edge technologies. It strives to build a platform of cooperation to promote connectivity, sharing, and mutual governance of the Internet," Ren said.

"An array of topics has been added to this year's conference, providing us with new perspectives toward hotly-discussed and cutting-edge topics such as artificial intelligence and targeted poverty alleviation, which have revolutionized and improved people's lives greatly," said Yao Jinbo, founder and CEO of 58.com, a major online marketplace operator.

Previous Article:Can You Hear Me Now? Why It’s Time to Tune Out Advertising Stocks

Next Article:Autoweek Racing report card: Our picks for the best and worst of F1 2017