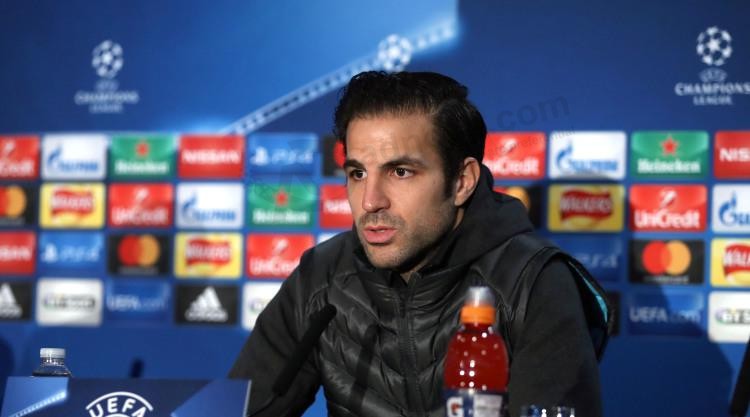 Fabregas has won almost every major honour in his storied career with Arsenal, Barcelona, Chelsea and Spain, including the World Cup - but the European Cup is the exception.

Yet Fabregas was initially out of favour last season in Conte's first campaign. He had made only four appearances at this stage last year; this season it is 18 after he showed his worth.

"Well, I would be lying if I say that I wasn't worried," said Fabregas, speaking ahead of Tuesday's Champions League Group C clash with Atletico Madrid.

"I wasn't playing, I wasn't really part of his (Conte's) initial plans and at that point you can do two things.

"You can just give up and accept you are not going to be part of the team or the club in the future. The other is what I did, put your head down and be humble, show him that he's wrong.

"My relationship with the manager (now) is fantastic.

"He trusts me. He knows exactly what I can give to the team."

The Blues secured their place in the last 16 by winning at Qarabag last month and can finish top with victory over Atletico at Stamford Bridge.

Atletico need to win to have any chance to advance, but are reliant on Qarabag avoiding defeat at Roma to reach the draw on December 11.

"Hopefully it will be Chelsea's year (in the Champions League)," added Fabregas, who reached the 2006 final with Arsenal and has also reached the semi-finals.

"We'll try our best to be consistent enough to reach the final and hopefully win."

Chelsea's policy is to offer players 30 and over only 12-month contract extensions, but Fabregas is not concerned by that.

"I'm very young. I really mean it. Especially how I play, the position I play. You can go for many more years.

"I'm where I want to be. I'm enjoying my football. When the moment comes to talk about different things I'll be here, ready for it."

Conte believes Fabregas has plenty of years remaining at the top.

"He is still young for sure," the Blues boss said.

"When you are 30 years old you have at least five more years. He's a winner in his mind, in his mentality, for this reason he is very strong."

Since the 3-0 loss at Roma, Chelsea have won five of their six games - the draw at Liverpool the exception - scoring 14 goals and conceding twice.

Asked if that would provide additional satisfaction, given the saga surrounding Diego Costa which saw the striker return after three years at Stamford Bridge, Conte was evasive.

The Italian, who is again without defender David Luiz (knee), said: "I think we must have great respect for Atletico Madrid and for the whole team, not only for one, two, three players.

"If the whole team after tomorrow's game has to play Europa League, it can happen."

Costa will be eligible to play for Atletico from January, when their transfer embargo is lifted.