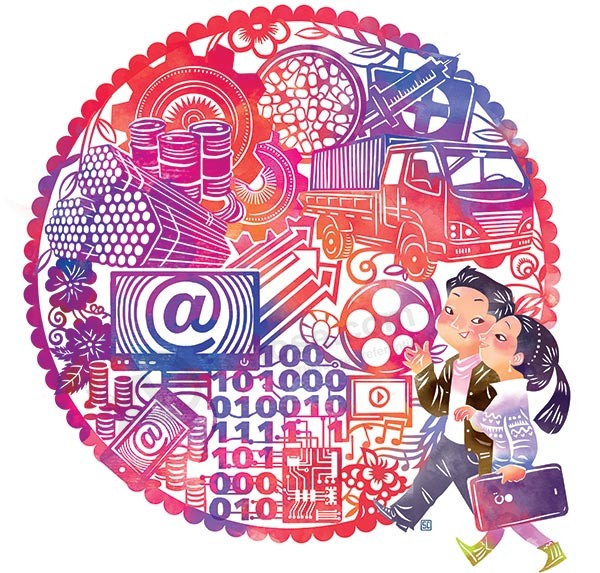 What happens every minute online in China? Well, in every 60 seconds, users hail about 1,400 cabs and 2,800 private cars on Didi Chuxing, the country's largest car-hailing company. More than 194,000 people are video or audio chatting on WeChat, the most popular social networking platform run by Tencent Holdings Ltd. And over 770 people buy something, with about $1,133,900 spent on purchases at Alibaba Group Holding Ltd's online marketplaces.

The data offers a quick look at how the internet is shaping China, in a stunning way. "The country does in 60 seconds (online) what some would only do over a day, week, or more," said Tech in Asia, a popular technology website which compiled the data. What is more important, the blossoming trend has unfolded just in few years, as the cyberspace gets increasingly intertwined with the offline world, officials and experts said.

China officially launched the Internet Plus initiative in 2015, which was designed to upgrade traditional industries by embracing new technologies such as mobile internet, cloud computing, big data, and the internet of things. In just two years, concrete progress has been made, with internet-related technologies revolutionizing sectors such as manufacturing, retail, transportation, finance, and healthcare.

"We will work faster to build China into a manufacturer of quality and develop advanced manufacturing, promote further integration of the internet, big data, and artificial intelligence with the real economy," said President Xi Jinping in the report he delivered at the 19th National Congress of the Communist Party of China.

Since the inception of the Internet Plus, new industries and business models have emerged, which have greatly boosted China's economic growth, according to Premier Li Keqiang.

AliResearch, a research institute of Alibaba, noted that internet-related growth has accounted for 6.9 percent of China's gross domestic product, the second highest proportion in the world.

The fast application of new digital technologies in traditional sectors has been enabled largely by China's powerful information infrastructure. The country has built the world's largest broadband network.

Thanks to the quick deployment of 4G mobile technologies and fiber-optic networks, the world's second-largest economy has also accumulated about 751 million netizens as of June this year, roughly equivalent to those of the United States and India combined, data from the China Internet Network Information Center show.

In comparison, the number for June, 2012 in China was just 538 million, reflecting the stellar growth the country has made in the past five years.

Miao Wei, the minister of Industry and Information Technology, said China has risen to be a strong player in the global internet arena, and become the largest manufacturing powerhouse in the world.

"Upgrading the manufacturing sector with advanced digital technologies is a global trend. China has already made a good start in this direction," he said.

The ministry has handpicked 206 smart manufacturing pilot projects across the country since 2015. Twenty-eight of them are rolling out industrial internet trials, which have boosted their production efficiency by more than 30 percent.

By establishing a computerized interconnection of machinery, big data and the internet of things which can analyze data from machinery and adjust its operation, companies are accelerating their push to upgrade plants.

Zhang Ruimin, chairman of Haier Group, a household appliances giant, said traditional enterprises have been completely overhauled in the internet age. The company has built an industrial cloud platform, which helps it swiftly satisfy customers personalized demands on a large scale.

As for businesses which used to be hit by the prevalence of internet technologies, positive changes are also showing up to inject new vitality. Brick-and-mortar stores, for instance, are starting to benefit from e-commerce behemoth Alibaba and JD.com Inc's efforts to develop the so-called new retail experience.

They are scrambling to help brands merge online and offline resources to offer customers a seamless shopping experience with the aid of artificial intelligence, big data and cloud computing technologies.

To be more specific, tech gurus are converting retail outlets into "intelligent stores" that have drawn thousands of labels, from Nike to Shiseido to Wyeth. Through an interconnected system, they allow shoppers to track product availability at other locations in real time and get timely delivery to their doorsteps while choosing to pay with their phones.

Danielle Bailey, Asia-Pacific research head at consultancy L2, said the integration of virtual and physical landscapes is an area where China leads the way.

"In the West you have this battle of online and offline ... Here through a variety of models you see where China has already had these things work, and not just empty talk," she said.

Such robust development has helped China secure five of the top 10 places in a ranking of the world's best-performing fintech players, according to a report released by UK-based advisory firm KPMG and Australian investment company H2 Ventures.

"China continues to dominate the fintech landscape," said H2 Ventures partner Ben Heap. "These firms are continuing a trend that is several years in the making and highlights the extraordinary rise of the fintech industry in China."

For example, Ant Financial has brought its wireless payment solutions to its Indian counterpart Paytm.com, and the two signed an agreement in 2015 to create a local version of Alipay.

Meanwhile, the Internet Plus strategy is spawning a tide of innovation in China, helping the country to evolve from an "innovation sponge", absorbing and adapting existing technology and knowledge from around the world, into a global leader in innovation, spawning a wide range of homegrown cutting-edge products and services.

Nothing better demonstrates this than the bike-sharing phenomenon. Created by Chinese players, including Ofo and Mobike, GPS-enabled, dockless bikes are now improving the lives of people in big cities at home and abroad who are fed up with congested roads and long for zero-emissions forms of transportation.

Mobike announced in November that it would start operations in Berlin, Germany, meeting the company's ambitious goal of expanding to 200 cities globally by the end of this year.

"In stark contrast to the previous generation of Chinese internet companies that are focused on domestic growth until the market became saturated, emerging startups are better at coming up with their own ideas and better aware of the opportunities abroad," said Zhang Xu, an independent smart transportation analyst in Beijing.

Previous Article:Bath May Be In Hot Water If Taulupe Faletau Plays For Wales This Weekend