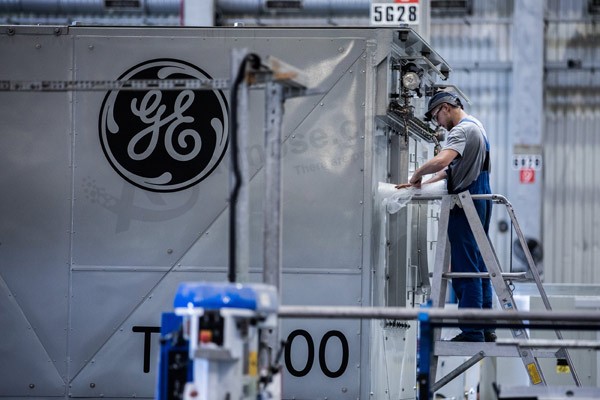 While China's Belt and Road Initiative has created huge growth opportunities for Chinese companies, many Western multinationals are also actively angling for a piece of the trade initiative, with international corporations like Honeywell and General Electric tweaking their businesses to win more orders.

US conglomerate General Electric recently decided to further extend its partnership with Power Construction Corp of China, which provides engineering and construction services focusing on renewables, by exploring new wind power opportunities in Pakistan and abroad.

This is part of GE's more than 10 Pakistan power projects with Chinese engineering, procurement and construction contractors in recent years. It is also planning to invest in electric power grids, new energy and oil and gas, in countries and regions involved in the Belt and Road Initiative with Chinese partners.

"China's uniquely advantageous position on the global economic stage is incomparable. The country offers an enormous wealth of hard-earned experience as well as technology that can be shared and transferred among developing countries," said Rachel Duan, president and CEO of GE China.

The company is uniquely placed to foster a complete ecosystem by building communication bridges between foreign and Chinese enterprises, and connecting players from the upper, middle and lower rungs of the industry's value chain, she added.

In 2016, Chinese construction and engineering companies ordered $2.3 billion worth of equipment from GE for installation in the countries and regions involved in the Belt and Road Initiative. GE plans to bid for more orders including natural-gas turbines and other power equipment in the upcoming years, she said. "We are confident of winning these orders," said Duan.

Honeywell International Inc, the US-based manufacturing and technology conglomerate, said it has been partnering with leading Chinese companies to explore infrastructure development and other opportunities in emerging markets, to support the country's Belt and Road Initiative.

Shane Tedjarati, president of Honeywell Global High Growth Regions, said his group was well-positioned to support the Belt and Road Initiative through its China growth strategy and portfolio.

Honeywell's high-growth regions consistently drive more than 70 percent of the company's growth and China has the biggest chunk of that, he said, adding that China has been the company's second largest market since 2013 and is currently the single largest contributor to its global growth.

Executives at mining giants BHP Billiton and Rio Tinto also told China Daily that they are optimistic that the Belt and Road Initiative could revive China's metal exports, which will in turn boost demand for iron ore.

"Most of the infrastructure work will require steel, and we see this a potential at Rio Tinto," said Jean-Sebastien Jacques, CEO of Rio Tinto.

"The initiative is very important, not only to China. Multilateral groups, such as the B20 as you can imagine, are watching the progress closely."

"Almost every project requires cooperation across regions, companies and industries, considering the increasing difficulty and complexity of infrastructure projects along the Belt and Road," said Ren.

Experts said the initiative could well be a windfall for the multinationals and many of them are gearing up for it.

Zhang Jianping, director of international economic cooperation at the National Development and Reform Commission, said the Belt and Road is a historical precedent and enables companies from home and abroad to jointly explore overseas markets, creating opportunities for domestic companies and big multinationals alike.

According to the Mercator Institute for China Studies, the economies involved with the initiative account for about 30 percent of the global economy, while figures from China Development Bank show that some $900 billion worth of projects are now either underway or in detailed planning stage.

Many Western firms are interested in being a part of China's Belt and Road Initiative, offering either technological edge or knowledge of local conditions, said Zhang.

Multinationals can also benefit from better connectivity in the long term as these emerging markets will be further developed and improved infrastructure might open new markets and ultimately drive global economic growth, he added.

Previous Article:Here’s How Your Job Will Transform in a Post-AI World

Next Article:Eden hopeful Star can rise at Bendigo