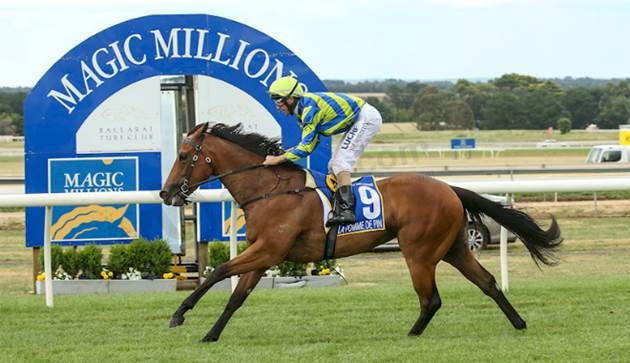 La Pomme De Pin collected $120,000 for her win in the Magic Millions race which asks competitors to run in the opposite direction, but not quite the $1.2 million he and some of his owners would have earned if he had put in one more bid last year for a filly that would later be named Houtzen.

Incredibly, La Pomme De Pin looks to have the same attributes that made the I Am Invincible filly Houtzen so potent last summer.

She flew the start from her outside barrier and was lengths in front when the field settled. She railed like she’d been going clockwise all her life and found herself 5.5 lengths clear of runner-up Anthemoessa at the end of the 1000-metre journey.

‘’She’s just a natural and we always made our intentions clear that we were going to lead and after 50 metres she was at Black Caviar odds wasn’t she,’’ Kennewell said.

‘’I was surprised at the odds ($5) to be honest. She was the best trialler when she jumped out the other morning.’’

The $4 favourite was the huge filly Our Toninicconi and she was doing her best work late to fill third place.

Kennewell, who went to $85,000 for owner Santo Guagliardo at the Magic Millions sale earlier this year to purchase the filly, said his confidence in her grew after her debut when she ran Long Leaf to a close second in Adelaide. The Lindsay Park-trained Long Leaf then went to Sandown and easily won the Merson Cooper Stakes.

‘’For a little filly she’s really done everything right,’’ he said. ‘’She had one jump out before her first defeat and she’s come on since then.

‘’Congratulations to Santo Guagliardo – he’s my biggest and best owner and a champion bloke who’ll be watching back in Perth and we look like we’ve got a runner on the Gold Coast.

Kennewell explained that La Pomme de Pin was named after an Italian restaurant at Saint Tropez in France.

The Morphettville trainer said he was just $2500 short of purchasing fellow I Am Invincible filly Houtzen last year but he might not have too long to stew over that decision to let her go as few juveniles this season have shown anything like her sizzling speed.

Jockey Joe Bowditch said it was the filly’s speed from the gates that won her the race, but he said the stable still has work to do to turn her into an elite performer.

‘’Her great attribute is her speed and that is what won her the race today, but she’s going to need to learn how to settle to go the whole way,’’ he said.

Previous Article:Daniil Kvyat's Formula One Career At Toro Rosso Could Be Over

Next Article:5 Digital Stats That Sum Up Cyber Monday and Black Friday