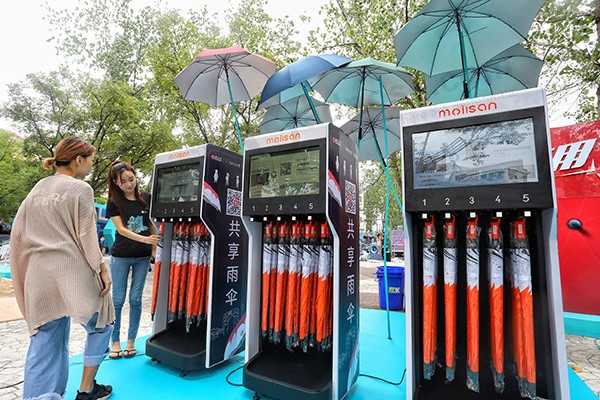 China's sharing economy has just been taken to a whole new level by Zhima Credit of Ant Financial, Alibaba's finance arm, making it even more citizen-friendly.

Users of apps that provide shared bikes and rental housing no longer need to pay any deposit upfront to avail the services, as long as their personal credit score is reasonable.

Trustworthy bike riders, defined as those whose credit score is above 650, can use the service without paying any deposit, which is usually 99 yuan ($15).

Similarly, such users can rent homes without paying any deposit.

This is expected to not only help more people to reap the benefits of sharing economy but expand user base of service providers.

Zhima's new credit service covers shared bikes, car rental, hotels and short-term house leases. The process of introducing the credit aspect to bicycle-sharing began this year, and has created a positive effect, said Yu Fengxia, deputy director of the Information Institute of the State Information Center, at a recent forum on sharing economy and credit.

In 2016, the trade volume of China's sharing economy was 3.45 trillion yuan, and involved over 600 million people, Yu said. "However, not until the start of this year has the market expanded at an exponential rate."

According to a report, from last January to April, the deposit-free credit service covered 381 cities, including county-level cities, saving 31.38 billion yuan for users and raising daily average user activity by 870 percent.

In addition, with more and more users adopting Zhima Credit, the total volume of sharing economy users surged by 370 percent, compared to the beginning of 2016. The monthly growth rate reached 12.7 percent.

Yu said: "The credit score, as evaluated by credit agencies at the intermediate level, helps consumers have a reasonable judgment on credibility at the primary stage. Many sharing economy platforms, such as Ofo, Mobike, and the house leasing platform on Alipay, now provide deposit-free service to users with relatively high credit scores, greatly lowering the threshold to get the service.

"Replacing the deposit system with the credit system has become an irresistible trend in the sharing economy area, and this trend is raising the efficiency and effectiveness of the sector, adding to user experience."

The new practice also challenges the old wisdom that credibility problems can be solved only by collecting deposits from users. However, it remains to be seen whether it would also help minimize or eliminate risks, observers said.

A joint study by the Information Institute and the Ant Financial Research Institute showed that deposit-free credit services lowered delinquency rate on rents in bike-sharing by 52 percent. They also brought down traffic fines in the sector by 27 percent.

Li Zhenhua, vice-dean of the Ant Financial Research Institute, said there are a great number of users who value their credit score highly. They regard bad credit as worse than forfeit of deposit.

Once the credit system penetrates many sectors, the combined effect will be such that the risk of losses due to insincere consumers will be minimized, Li said.

Next Article:Spot will air during the Nascar legend's final race on Sunday