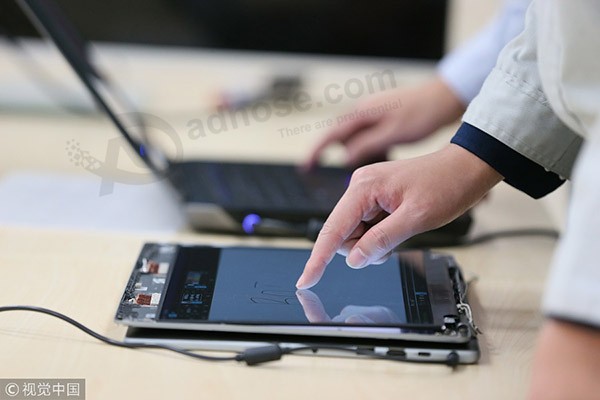 BOE Technology Group Co Ltd plans to ramp up its efforts in the internet of things sector by utilizing display, sensor, artificial intelligence and big data technologies, as well as working with partners in computing, storage, software and other related equipments to build an industry ecosystem.

The Beijing-based technology company is transforming from a semiconductor display manufacturer to an IoT technology and service provider, putting its focus on display and sensor devices, smart systems and healthcare services.

"We are positioning BOE as an IoT company providing intelligent interface products and services for information interaction and human health," said Wang Dongsheng, founder and chairman of BOE at its Innovation Partner Conference on Tuesday in Wuhan, Hubei province.

Wang said total revenue of the global IoT market will reach $27.6 trillion in 2030 from $1.1 trillion this year, and said the firm will continue to work with enterprises in the IoT sector to promote both hardware and software innovation, covering the fields of healthcare, digital art and intelligent retail.

"R&D spending now accounts for no less than 7 percent of our revenue. Moreover, we attach importance to patent applications. Our new patent applications reached 7,570 last year, and the number is expected to surpass 8,000 this year," said Wang.

The company has also signed a strategic cooperation agreement with e-commerce giant Alibaba Group Holding Ltd and SAP SE on building a new retail ecosystem, marking another step in its endeavor to open up its application and technology platform.

Chen Yanshun, CEO of BOE, said the company's turnover would double every three years and reach 300 billion yuan ($45.2 billion) by 2022.

"We will expand our applications from traditional fields such as smartphones, tablets, PCs, television and other display devices to new products like vehicle displays, electronic tags, wearable devices, virtual reality and augmented reality," said Chen.

BOE has accelerated its layout in the IoT field this year. It has launched a smart, interactive shopping terminal together with Intel Corp, and developed brand-new IoT solutions together with China Mobile Communications Corp.

Previous Article:Jack Leach Content Despite Ashes Snub As He Prepares For Lions Duty

Next Article:Custom-made products with distinct designs are rolled out for every occasion