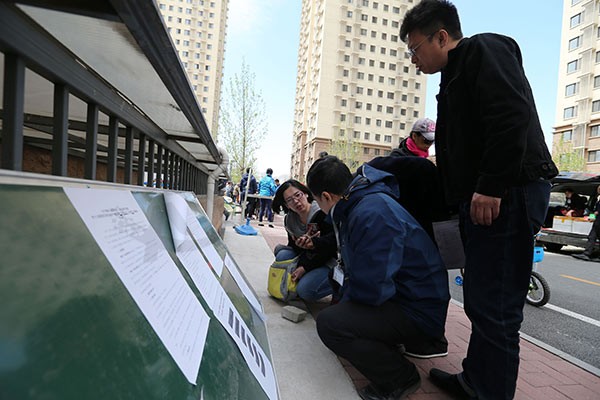 BEIJING－Major Chinese cities, developers and the financial sector are moving quickly to join a government-led campaign to develop the rental housing market.

This comes as the country's top authorities aim to provide a long-term solution to an overheated real estate market by encouraging more people to rent rather than buy.

Now the government wants to further tap the rental market to stabilize home prices and curb speculation, and a key is providing tenants with the same access to public services and decent living conditions that owners enjoy.

A new house rental policy in Beijing came into effect recently, guaranteeing the education rights of tenants' children and allowing those renting government-subsidized housing to have their hukou (household registration) registered and transferred to their rented homes.

In the southern city of Guangzhou, a policy released recently made clear that the per capita residential area in a rented house should be no smaller than 5 square meters to ensure a healthy and safe environment for tenants.

At least 10 cities have allocated land for rental housing construction, according to data from Centaline Property.

In Beijing, authorities plan to supply 6,000 hectares of land for residential housing by 2021, 30 percent of which will be for rental houses.

China Vanke, the country's top property developer, had offered 12,000 to 18,000 apartments for long-term leasing as of July, aiming to increase the number to 100,000 by the end of the year, according to Yu Liang, the company's chairman and CEO.

AliPay, the leading mobile payment platform, announced last month it would enable users in eight cities to rent houses through the platform without having to pay deposits, based on their credit records.

Financial innovation is catching up to give rental property managers new access to funding. A "quasi" real estate investment trust or REIT was approved last month to allow a Beijing-based condominium manager to offer retail investors securities backed against income from rental apartments, the first financial product of its kind in China.

All these new measures are part of a plan to improve affordability and stabilize home prices in the medium to long term, according to a report from global ratings agency Moody's.

China's once-sizzling property market has shown signs of cooling as prices have faltered in major cities amid tough government curbs. Central authorities have reiterated on many occasions that "housing is for living in, not speculation".

For many new settlers in the cities, owning a house is too expensive while renting means less comfort, frequent moving, lack of public services and dealing with dishonest agents.

Moody's said the push to boost rental housing would not affect sales of property developers over the next six to 12 months, citing "the general desire of the Chinese to own their homes".

The long-term potential is there: China's rental housing market will reach 4.2 trillion yuan ($637 billion) in revenue by 2030, up from 1.3 trillion yuan now, according to a research report from Orient Securities.

However, the development of the market will require "continued government support to ensure the long-term effectiveness of aims such as cheaper land prices, facilitating funding channels and investment capital recycling, and promoting equal rights for owners and tenants," the ratings agency said.

Previous Article:Josh Taylor Ready To Make A Name For Himself Against Miguel Vazquez

Next Article:George Kruis Dropped By England For Australia Test