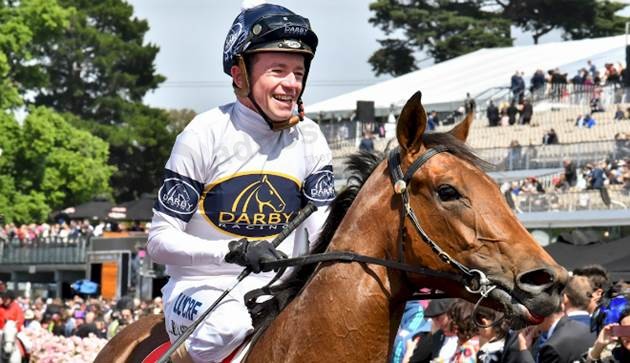 It might be Melbourne Cup Day but trainers Gai Waterhouse and Adrian Bott were already casting their eye to next year’s Golden Slipper after smart juvenile Setsuna continued her winning ways in Melbourne.

The daughter of Choisir followed up her brilliant victory in the Inglis Banner (1000m) at The Valley last start, making all down the straight to comfortably defeat the Tony McEvoy-trained pair of Roobeena and Aristocratic Miss in the Emirates 100th A380 Stakes at Flemington.

Bott was pleased to see the filly show the benefit of her race experience and said she would now be spelled for several weeks before embarking on an autumn campaign aimed at some of the country’s premier two-year-old races.

“She was very professional today,” he said.

“She was able to ping the gates, find the fence, control and dictate by using her speed and it was a very good win in the end.

“She’s proven herself well and truly this preparation, so we’ll look after her now, give her a good spell in the paddock and bring her back for a Golden Slipper campaign.

“That will give her enough pri
zemoney to hopefully qualify her into the Slipper.”

The win was the 10th this season for the combination of Waterhouse/Bott and jockey Stephen Baster, and moved their lethal strike rate above 30percent, much to the delight of the popular jockey.

Baster said he was confident Setsuna can continue to improve with racing.

“She's amazing - we thought she might've been getting close to the end of it (her preparation) after her last run but she pulled up and improved from the run, and showed that today,” Baster said.

“She still got there and star-gazed, so she won quite convincingly.”