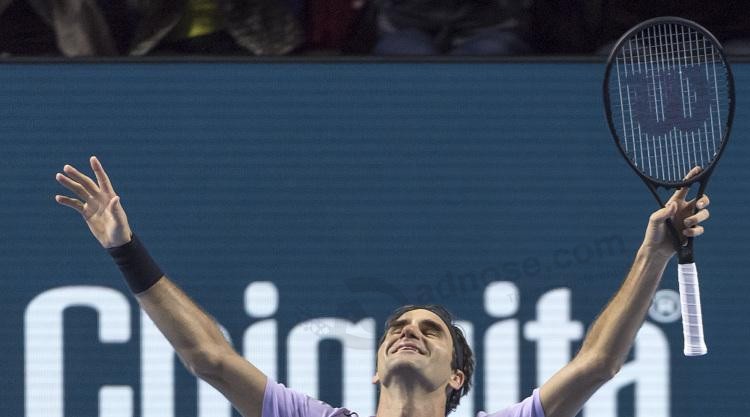 Roger Federer won the Swiss Indoors title in Basel for a record eighth time with victory over Juan Martin del Potro but has pulled out of next week's Paris Masters.

The Swiss cited the need to rest his troublesome back for his decision, which all but hands the year end world number one ranking to Rafael Nadal.

Federer's victory over Nadal in the final of the Shanghai Masters two weeks ago and then victory in Basel, a tournament Nadal missed because of a knee problem, had appeared to set the stage for a showdown at the ATP Finals in London.

But, with Nadal 1,460 points clear of his great rival and only 1,500 up for grabs at the O2 Arena, the Spaniard only needs to win one match in Paris to rack up an unassailable lead.

Federer said: "I'm really sorry I am not participating in the Rolex Paris Masters this year, but my body needs some rest after the Basel tournament.

"I have played a lot of tennis this season and I have to take care of my body if I want to continue playing at the highest level in the years to come. In 2016, it was very painful to miss half of the season, so I learned from it."

Federer's withdrawal is a major blow to the tournament, the final Masters event of the season, and tournament director Guy Forget said he was "extremely disappointed".

The 36-year-old's seventh title of the year is also the 95th of his incredible career, taking him clear of Ivan Lendl and into second place in the Open era but still 14 behind Jimmy Connors.

Federer broke Del Potro's serve in the first game of the match and again in the ninth, but was unable to serve out the set and also squandered a 3-0 lead in the tie-break.

Del Potro rattled off six points in a row and, although Federer saved two set points on his own serve, a service winner from Del Potro gave him the set after 65 minutes.

A solitary break of serve in the 10th game of the second set was enough for Federer to force a decider, which he started by losing serve and hammering a ball into the roof of the arena in frustration.

However, that seemed to bring out the best in the 19-time grand-slam champion, who took the next four games in succession and eventually served out for a hard-fought win.

In Vienna, Lucas Pouille had an easier time claiming the biggest win of his career by beating Jo-Wilfried Tsonga 6-1 6-4 in the final of the Erste Bank Open.

Pouille's maiden ATP World Tour 500-level victory makes him the first player i n 2017 to win on all surfaces, adding a hard-court crown to triumphs on the clay of Budapest and grass of Stuttgart.