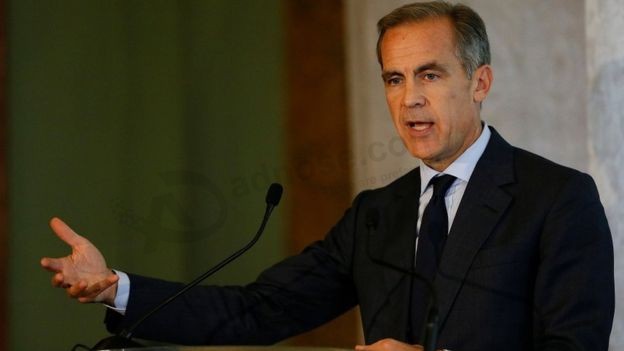 The UK's economy had higher than expected growth in the three months to September - increasing the chances of a rise in interest rates in November.

Gross domestic product (GDP) for the quarter rose by 0.4%, compared with 0.3% in each of 2017's first two quarters, according to latest Office for National Statistics figures.

Economists said the figures were a green light for a rate rise next week.

The financial markets are now indicating an 84% probability that rates will rise from their current record low of 0.25% when the Bank of England's Monetary Policy Committee (MPC) meets on 2 November.

Governor Mark Carney indicated to the BBC last month that rates could rise in the "relatively near term".

While many economists echo that view, some think the Bank of England will keep rates where they are.

"If all we can muster... is an acceleration in economic growth that's so small you could blink and miss it, the Bank of England could still think better of a rate rise next week," said Ross Andrews from Minerva Lending.

The slightly better growth figures will strengthen the arguments of the interest rate hawks on the Bank of England's monetary policy committee.

Next Thursday, the Bank's rate setting committee meets to decide whether to raise interest rates for the first time in more than a decade.

With inflation at 3%, Mark Carney, the governor, has signalled that an increase is on the cards.

And with economic growth more robust than many economists expected, those who support that direction of travel on the MPC will be emboldened.

To be clear, any rate rise will be small. And future rate rises will be gradual.

But the Bank is sending a clear message - slowly, eventually, the period of historically low interest rates is coming to an end.

Chancellor Philip Hammond said: "We have a successful and resilient economy which is supporting a record number of people in employment.

"My focus now, and going into the Budget, is on boosting productivity so that we can deliver higher-wage jobs and a better standard of living."

Shadow chancellor John McDonnell said: "The UK is not growing as fast as many of our trading partners in the EU or the USA.

"The Chancellor cannot keep hiding from the facts, as his approach of carrying on as usual is seriously putting working people's living standards at risk."

The biggest contributor to growth in the third quarter was the service sector, which expanded by 0.4%.

In particular, computer programming, motor traders and retailers were the businesses that showed the strongest performance.

Manufacturing expanded by 1% during the quarter - a return to growth after a weak second quarter.

However, construction contracted by 0.7% in the quarter, accelerating from the 0.5% decline recorded in the previous three months.

Next Article:Deutsche to pay $220m over Libor probe