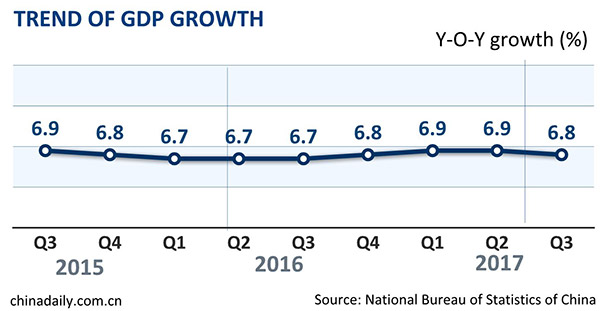 China's economy expanded by 6.8 percent in the third quarter of this year, according to the National Bureau of Statistics (NBS) on Thursday.

"It shows that the economy is very resilient," said Xing Zhihong, spokesman of the NBS, at a news conference.

Xing also said the country's economic structure has further improved as industrial upgrading is well underway and the services industry has played a more important role in boosting overall growth.

The NBS data show that China's industrial output grew by 6.7 percent year-on-year in the first three quarters, up by 0.7 percentage point compared with the same period of last year.

Fixed-asset investment increased by 7.5 percent from January to September, down from 8.2 percent in the same period of last year.

Retail sales, meanwhile, expanded by 10.4 percent in the first three quarters, unchanged from a year ago.

The bureau said the trend of the economy stabilizing and improving had continued in the first three quarters and there have been more favorable factors supporting middle- and high-rate growth of the world's second-largest economy.