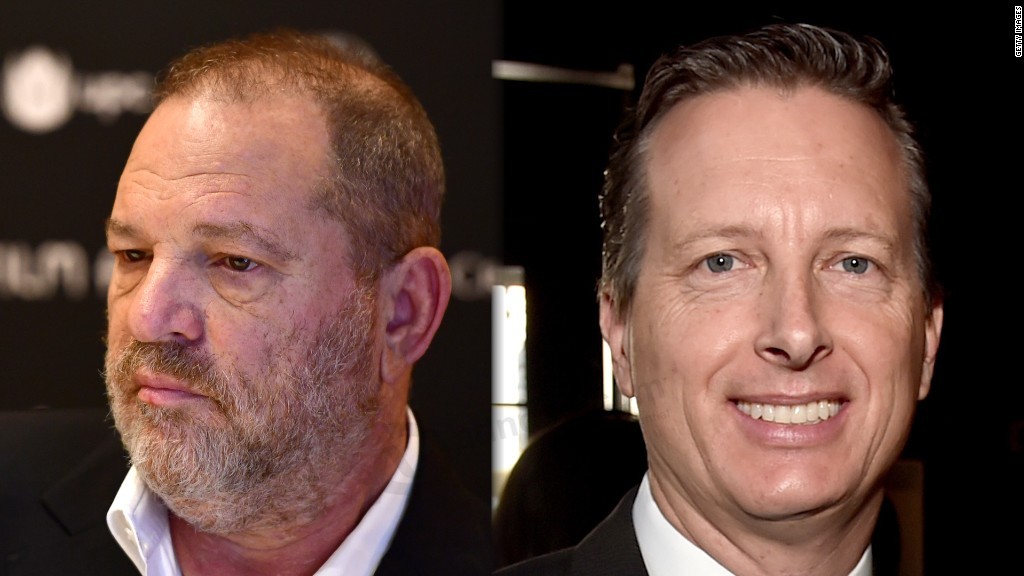 Weinstein is laying low, not commenting on his expulsion from the Academy of Motion Picture Arts and Sciences. His former company is trying to stay afloat. And his attorneys are bracing for criminal investigations and lawsuits.

Meanwhile, even more women are coming forward with allegations of sexual harassment and assault by Weinstein. Police in London are investigating reports by two women.

Actors and producers, as well as advocates outside the industry, are asking how the recent revelations can translate to meaningful change for women in the entertainment business.

She said people are "truly mystified that it took this long for all of this to come out, and that includes both media and executives in town."

Accusers and journalists seeking to write about them were stymied in the past by legal threats from Weinstein's team.

But now the shape of his legal team is changing. Min reported that attorney Charles Harder, who she called "media's Darth Vader," is no longer working with Weinstein.

Min said this represented a "pivot" in Weinstein's legal strategy -- from challenging news organizations to preparing to defend himself in criminal investigations.

When The New York Times first published its investigation into Weinstein ten days ago, Harder threatened to sue the paper, but that suit did not materialize. He did not immediately respond to a request for comment from CNNMoney.

Separately, a source told CNN that David Boies, who has represented both Weinstein and The Weinstein Co., is not actively working with either entity.

But Weinstein still has litigator Patty Glaser working on his dispute with The Weinstein Co., which fired him last Sunday.

(Weinstein is expected to contest his firing from the firm at a board meeting on Tuesday.)

He also has at least two criminal defense attorneys, Blair Berk and David Chesnoff, in his camp.

Colin Jost of "Weekend Update" on "SNL" cracked a joke about Weinstein and prison time on Saturday night.

"He doesn't need sex rehab," Jost said. "He needs a specialized facility where there are no women, no contact with the outside world, metal bars and it's a prison."

The Weinstein scandal has been deeply embarrassing not only for the Weinstein Co. but for the entertainment industry writ large.

The Academy booted him on Saturday. The Producers Guild of America is expected to discuss Weinstein's status at a meeting on Monday. The Television Academy, which oversees the Emmy Awards, is expected to do the same on Thursday.

"Our view has been this alleged behavior is abhorrent and appalling. We expect this to be discussed at our Board Of Governors meeting this Thursday evening," the TV Academy said in a statement.

The Weinstein Co. produces popular TV shows like "Project Runway." But it is a state of corporate limbo now, with widespread doubts in Hollywood about its future as a standalone company.

The company's next film, "The Current War," was supposed to come out in November, but it has now been delayed to early 2018. And its forthcoming TV projects with Amazon have been scrapped.

The company may be sold off in pieces.

"My opinion is that The Weinstein Company as it sits today, is done," the company's chief operating officer, David Glasser, said to Deadline. "The reality is, in its current form, the name, the brand has been completely torpedoed and destroyed. I do feel there are probably other incarnations we have to look at."

Harvey's brother Bob Weinstein sounded more bullish in an interview with The Hollywood Reporter -- even while many staffers are pessimistic.

He said the company's bankers are "supporting us" and "there is a plan to come out on the other side. And also the other side that makes the public rightfully feel happy that what Harvey stood for exists no longer. The public deserves that. The victims deserve that. Everybody deserves that."

Bob Weinstein also confirmed that the company is working on a name change.