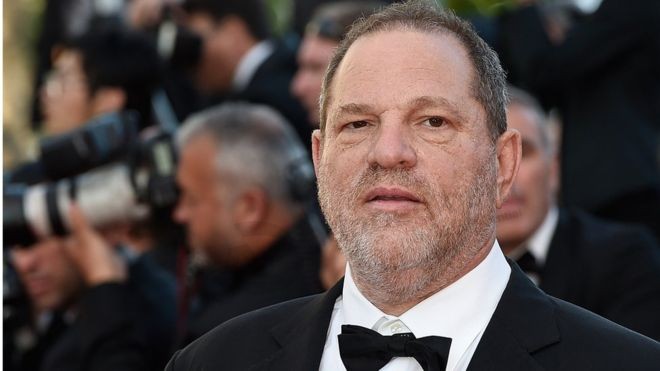 Harvey Weinstein, the film producer accused of sexually harassing female employees for nearly three decades, has been fired by the board of his company.

The Weinstein Company directors said that "in light of new information about misconduct", they had terminated Mr Weinstein's employment "effective immediately".

Mr Weinstein had been informed.

The Miramax and Weinstein Company co-founder has produced a number of Oscar-winning films, including Shakespeare in Love, The King's Speech and The Artist.

Following a New York Times report about the harassment claims, the 65-year-old apologised and said he planned to take a leave of absence.

"The way I've behaved with colleagues in the past has caused a lot of pain, and I sincerely apologise for it," Mr Weinstein said.

However, he later disputed the report, which said he had reached at least eight settlements with women, and vowed to take legal action.

Last week Weinstein's lawyer, Lisa Bloom, said that he denied many of the allegations made against him as "patently false".

"He has acknowledged mistakes he has made," said Ms Bloom. "He is reading books and going to therapy. He is an old dinosaur learning new ways."

But on Saturday, Ms Bloom said in a tweet that she was no longer advising Mr Weinstein.

"I have resigned as an advisor to Harvey Weinstein," the tweet said. "My understanding is that Mr Weinstein and his board are moving to an agreement."

Mr Weinstein is one of the most powerful men in Hollywood.

The allegations against him, according to the New York Times report, emerged mainly from young women hoping to break into the film industry and included celebrities Ashley Judd and Rose McGowan.

The accusers said the film producer forced them to massage him and watch him naked; in return for sexual favours, he promised to help advance their careers, they said.

Mr Weinstein, who is married to English fashion designer Georgina Chapman, formed the Miramax production house in the late 1970s with his brother and then sold it to Disney.

The pair went on to create The Weinstein Company and produce such hits as Django Unchained, Lion and The Butler.

Next Article:Blade Runner 2049 disappoints at US box office