Hurricane Maria could be a $95 billion storm for Puerto Rico 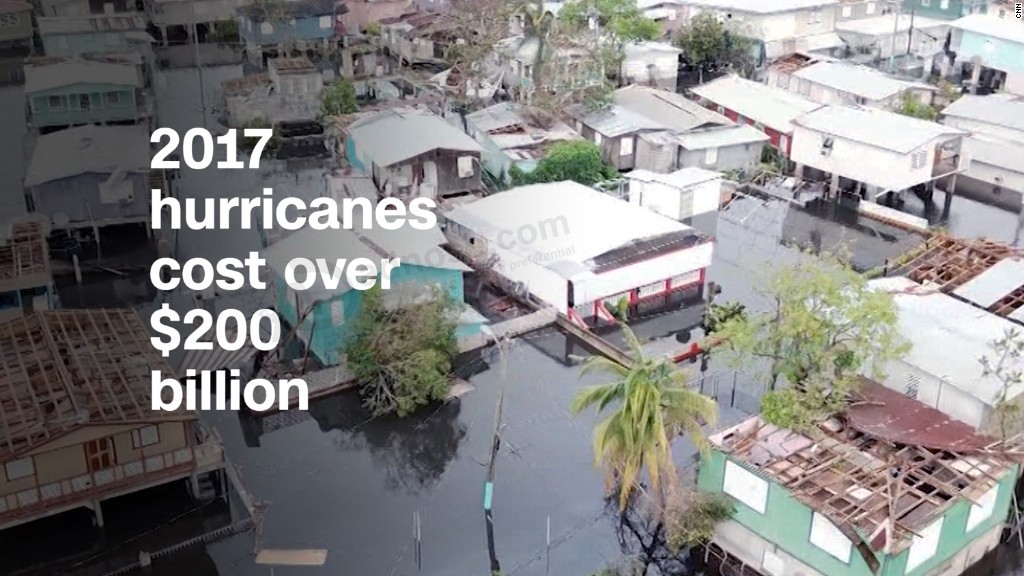 Hurricane Maria could cost Puerto Rico $45 billion to $95 billion in damage -- a devastating blow to the island's already ailing economy.

The estimate underscores "why officials are now suggesting that its economy may be set back decades," Adam Kamins, a senior economist at the firm, wrote in an analysis.

The damage estimate from Moody's is the highest yet. A more conservative estimate earlier this week from the disaster research group Enki Research put the total at $30 billion.

Damage to Puerto Rico has been catastrophic. People are scrambling for food, water, fuel and cash. Almost the entire island is without power, and outages are expected to last for months in some areas.

Related: Who will help Puerto Rico?

The Moody's estimate says as much as $40 billion could be lost in economic output because of impassable roads and lost power. Property damage could total $55 billion.

For comparison: Moody's estimates that Hurricanes Irma and Harvey combined caused more than $150 billion in damage after those storms hit major U.S. cities in Texas, Florida and Georgia.

"Given that Harvey and Irma disrupted far larger and more vibrant economies than that of Puerto Rico, this reflects the stunning amount of damage that Maria has wrought," Kamins said.

Related: The people of Puerto Rico are in a desperate scramble for cash

Puerto Rico's economy was already struggling. The island has been in recession for 11 years and has lost 10% of its population in that time. In May, it filed the largest municipal bankruptcy in U.S. history.

Kamins said fallout from Hurricane Maria could make it all worse. Puerto Ricans are American citizens and can freely move to the mainland.

"The end result could be a permanent increase in the rate of population decline, with many of those who remain too poor to move elsewhere," he said. "Puerto Rico's already murky future is now even more in doubt."

The catastrophe modeling firm RMS released a damage estimate Thursday for the entire Caribbean that was also more conservative than Moody's. It said damage to the region could be $30 billion to $60 billion.

Maria devastated several islands in the region, including Dominica and the U.S. Virgin Islands.

Previous Article:4 ways Trump and his family could benefit under the Republican tax plan