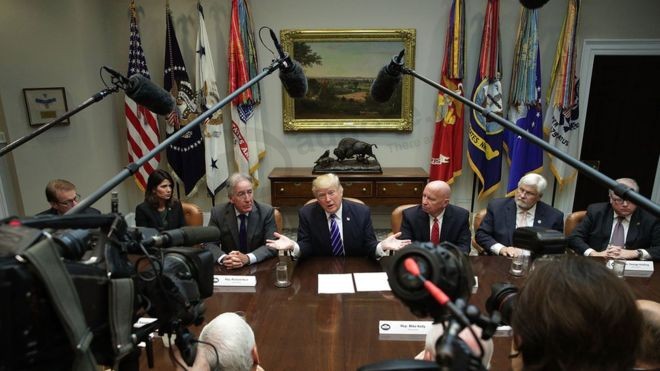 US President Donald Trump has called for major tax cuts as part of a longstanding Republican effort to overhaul the US tax system.

A framework released by Republicans calls for lowering the tax rate for corporations from 35% to 20%, among other changes.

The president said the revamp will make the US more competitive and help middle class families.

Democrats criticised the plan as a give-away for the wealthy.

The Republican blueprint does not detail what tax benefits might be eliminated to offset the cost of the cuts - negotiations that are likely to be difficult.

The Chamber of Commerce, an influential business group that has pushed for reform, said it would remain engaged during the "hard decisions" ahead.

What cuts are in the Republican tax plan?

President Trump said he wanted to simplify the system, lower the burden on middle class families and make the US more competitive.

"Our country and our economy cannot take off like they should unless we dramatically reform America's outdated, complex and extremely burdensome tax code," he said.

Among the changes, Republicans would slim the number of tax brackets to three - with people charged at a 12%, 25% or 35% rate.

What incomes would qualify for each rate is still unknown.

"He's talking the talk but he's not walking the walk," said Senator Chuck Schumer of New York, a top Democrat.

Mr Schumer also said the cuts would increase the deficit, putting entitlement programmes such as Medicare and Social Security at risk.

The Committee for a Responsible Federal Budget, a nonpartisan think tank, said a rough analysis suggests the proposal would lead to $2.2tn in net cuts over about a decade.

The Trump administration maintains that closing loopholes will help offset revenue loss, but the plan does not specify what benefits will be eliminated.

Lawmakers plan to preserve tax incentives for homeownership, retirement, education, as well as research and development.

White House officials said they intend to erase deductions for state and local taxes, among others.

But economists maintain that growth will not be enough to close the gap. They expect the plan to add to the US debt, which has already passed $20tn.

"It is clear that much more work needs to be done to ensure tax reform is fiscally responsible," the Committee for a Responsible Federal Budget said. "Given today's record-high levels of national debt, the country cannot afford a deficit-financed tax cut."

Republicans are looking for a policy win, after failing to reform US healthcare.

The Trump administration had earlier pledged to achieve tax reform before the end of August.

But it has been tough to reach agreement on even the broad goals released on Wednesday, many of which are familiar from earlier proposals.

Republican leaders presented a united front on Wednesday, pledging to make changes this year while they control both the White House and Congress.

Previous Article:UK must deal with its debts, May to say

Next Article:Record inequality: The top 1% controls 38.6% of America's wealth